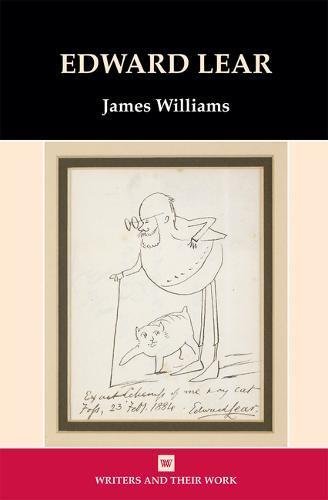 Some things never change, the world is declining, and only a very few things seem to be getting better with the passing of time. This is certainly the case with the “Writers and their Work” series: when James Williams told me his book was to appear in it I was a little disappointed as I thought of Joanna Richardson’s ancient chapbook consisting of just 30 pages, a text I had no longer looked at after using it for a quick overview of Edward Lear when a thesis on him was proposed to me back in 1981. I had occasionally seen pamphlets from this series in English bookshops, then they disappeared, but now I suspect I no longer recognised them.The new bok by James Williams consists of about 120 pages of text with several illustrations and, most of all, it does not only present a few original ideas together with summaries of previous criticism, admittedly rather sparse at the time Richardson published her guide to Lear.

Williams has written an exhaustive introduction to Edward Lear as a nonsense poet, avoiding to waste space on biographical details — amply available in the several biographies in print — and focussing his attention on the “work” rather than the “writer”. Moreover, his discussion — while mentioning all the most important and recent critical contributions — is largely original. I was particularly impressed by his treatment of the limerick, enphasising not only its strict organisation which imposes limits on the development of the “predestined poetic biographies” of their protagonists, but also its liberating potential thanks to the power of linguistic discovery that Wittgentein attributed to linguistic games. I am not sure I fully agree with this notion as it leads to a tendency to interpret the single limericks in a way that is designed to foreground the witty originality of the critic rather than the obvious fun, devoid of secondary purpose, of the author and ordinary reader at the discovery brought about by the rhymes. Typical examples of this are Thomas Dilworth’s essays which, if I am not mistaken, Williams avoids mentioning and does not follow to their extreme consequences.

Lear’s later production of songs and stories — the latter strangely ignored considering Williams has written an essay on “Edward Lear’s Luminous Prose” (Rivista di Studi Vittoriani 34-35, 2012-2013.) — is more amenable to interpretive exercises and Williams’s discussion of “The Dong with a Luminous Nose” is particularly impressive.

The treatment of Lear’s invented words is perhaps a bit unbalanced, insisting on their derivation from the many foreign languages he heard while travelling: the derivation of “scroobious” from Albanian “scroo” (“he writes it down”) is totally convincing but the meanings Williams gives the word in the different contexts in which it appears are mainly positive (“odd, eccentric, peculiar”), at least from Lear’s point of view, while I have always seen it as a negative adjective — but then an Italian speaken finds it hard not to connect it to “scorbutico” (irritable, cantankerous): the Old Person of Philae does actually look rather irritable perched on his palm.

Of course it is not necessary to agree on everything in a book to appreciate it, and Williams has undoubtedly written an enjoyable and original study of Edward Lear’s nonsense writing and presented a portrait of an original and, as he briefly hints in the “Coda” to the book, influential writer.