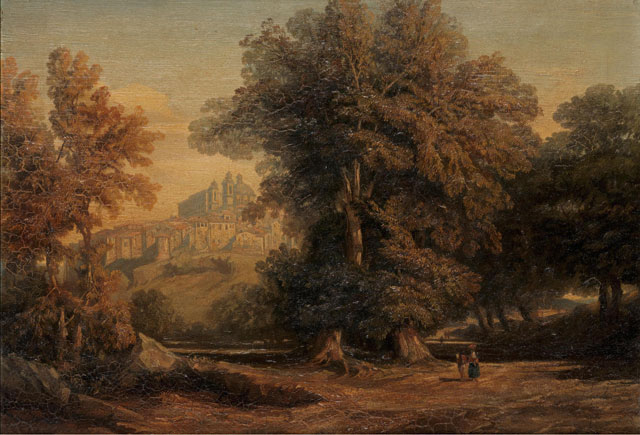 [Val Montone is] one of the most elegant campagna towns and very curious: it is in a deep dell in the Latin valley – but rises on a mound – crowned with a superb church and castle – through the town itself is wretchedly poor…Fine trees are all around Val Montone – and it is altogether a delightfully quiet place.
(Edward Lear)

A pencil drawing (with white bodycolour) of Val Montone from 1839 is illustrated in Vivien Noakes’ book The Painter Edward Lear (Newton Abbot, 1991, p. 13). Now in the collection of the British Museum, the composition is similar to the present lot. Travellers on a rural path lead the viewer’s eye to the commune of Val Montone, framed between the foliage of magnificent trees. Lear left for Italy in 1837, writing to his sister about the journey from Milan to Florence: ‘I never enjoyed anything so much. Thick woods of oak are on every side, and the road which is very steep and winding, looks quite over all the enormous flat plain’.1

Lear’s earlier oil paintings were dominated by a brown and umber palette and it wasn’t until his interaction with William Holman Hunt, during the 1850s, that he begun to employ more vibrant colours.2 With lovely detail and clarity, the skills gained from his earlier years as an ornithological draughtsman, is evident in the present lot.