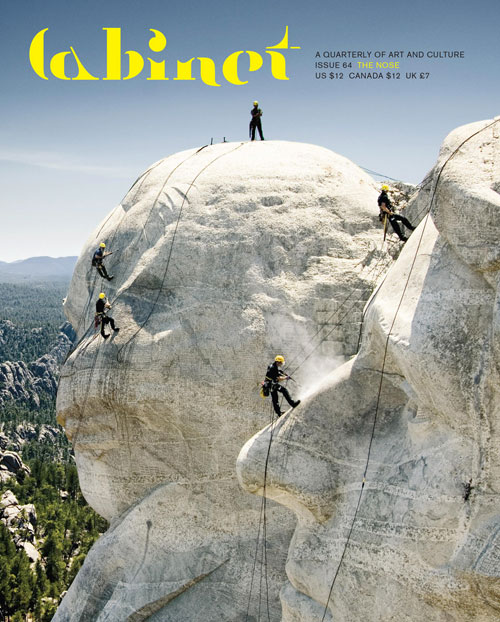 A few weeks ago, Cabinet: A Quarterly of Art and Culture published a long article by D. Graham Burnett on Edward Lear’s “The Dong with a Luminous Nose” in its “The Nose” Issue 64, pp. 84-91: “The Luminosity of the Nose” is now available for download from Burnett’s own website.

The New Yorker, in its April 23 issue, behind a David Hockney cover has a long review of Jenny Uglow’s Mr Lear by Adam Gopnik, “The Sense beneath Edward Lear’s Nonsense,” among whose many original observations I’ll quote this comparison between Lear and Audubon:

Lear’s parrots, for all their exoticism, strike a distinctly English note, and are almost like Regency political cartoons in their airy, bright-colored clarity. In fact, the differences in style between Audubon’s and Lear’s birds suggest almost perfectly realized national types. Audubon was drawn to the democratic and the encyclopedic—birds of all kinds occupying a common space. Lear’s subject was the eccentric individual, poised on its perch. His parrots display plumage, fashion, and intelligence, mixed with aristocratic unself-consciousness. Where Audubon’s parrots gyrate and foreshorten themselves—one can almost hear them chattering as they press their beaks toward the picture plane—Lear’s are sphinxlike in their mysterious stillness. Audubon fixed a whole nation of birds in action in the wild, even when he had had their corpses wired and posed beforehand. Lear’s parrots, drawn from living captives in the newly opened London Zoo, are rich and self-sufficient on their perches. Their minimal movement—a feather astray here, a wing akimbo there—makes them look uncannily like Gainsborough’s feathery society beauties, who are equally silent, equally sure.

Another original touch is the fact that in the magazine the piece is entitled “Knowing Mr. Lear” while in the contents for the issue the title is given as “Edward Lear’s Bifurcated Life:” a trifurcated display of Lear appreciation. This article also has something to say on the “Dong ode,” noting that “the luminous nose of the Dong is not biological, like Rudolph’s. It is hand-tooled, like a steampunk machine… an up-to-date device, like an iPhone flashlight, for finding Jumbly Girls in the dark.”

1 Response to Two More Worth Reading on Edward Lear