Edward Lear’s “Rich and rare were the gems she wore”

I have already discussed Edward Lear’s Irish sources here, here and here. Another fine instance is the parody in four pictures that Lear drew of Thomas Moore’s “Rich and rare were the gems she wore” from the first volume of Moore’s Irish Melodies (1807):

RICH and rare were the gems she wore,
And a bright gold ring on her wand she bore;
But, O, her beauty was far beyond
Her sparkling gems or snow-white wand. 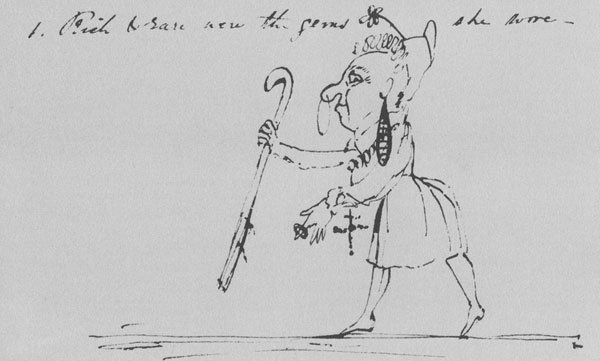 “Lady! dost thou not fear to stray,
So lone and lovely, through this bleak way?
Are Erin’s sons so good or so cold
As not to be tempted by woman or gold?” 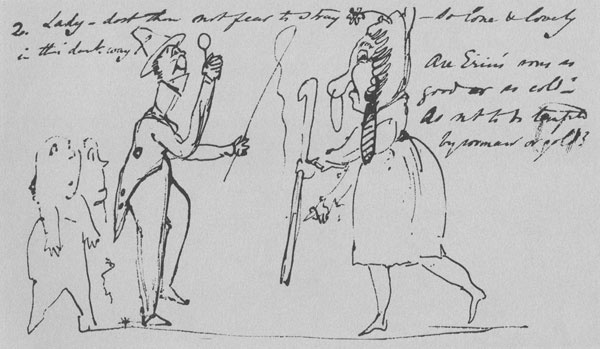 “Sir Knight! I feel not the least alarm,
No son of Erin will offer me harm;
For though they love woman and golden store,
Sir Knight! they love honor and virtue more!”

On she went, and her maiden smile
In safety lighted her round the green isle;
And blest forever is she who relied
Upon Erin’s honor and Erin’s pride! 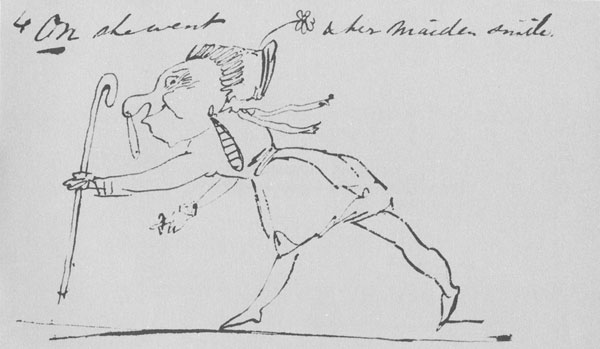 What makes these illustrations (from Lear in the Original pp. 169-173) particularly interesting is that they are clearly no more than an expansion of a caricature by Thomas Hood and show that much of Lear’s early work was inspired by his punning humourous work; here is Hood’s illustration for the poem from his Whims and Oddities, in Prose and Verse (London: Lupton Relfe, 1826), facing page 13:

This was first noted by Michael Heyman, Isles of Boshen: Edward Lear’s Literary Nonsense in Context (Thesis submitted for the Degree of PhD, University of Glasgow, Faculty of Arts, Department of English Literature, 1999), pp. 32-33.