“Twentieth of Twenty-one”: Edward Lear and his Siblings (3)

The Lears were non-conformists and had their children baptized at the Meeting House at Haberdashers’ Hall by Pastor Joseph Brooksbank, and all the children who reached adulthood, except Charles, appear in the “Register of Births and Baptisms at the Haberdashers Independent Hall at Staining Lane in the City of London from 1785 to 1825” (RG4/4243), scans of which are available online at BMDregisters.co.uk. There are records for the baptism of:

Only Charles Lear (1808) is missing; however, he appears in the “Register of Births at Dr Williams’ Library in Red Cross Street, Cripplegate, London registered between 1820 to 1824” (RG4/4664) along with the other children: here Jane – as well as the non-surviving Sarahs – are missing while all the others are listed, nos. 2813-2823. RG4/4664 may be missing Jane and the non-surviving children either because the original parchment birth certificates which served as the basis for registration at Dr Williams’ Library were lost (these are also available at BMDregisters as RG5/095, “Protestant Dissenters’ Registry”), or more probably because only the children still alive in November 1822 were registered, and Jane died in February of that year. 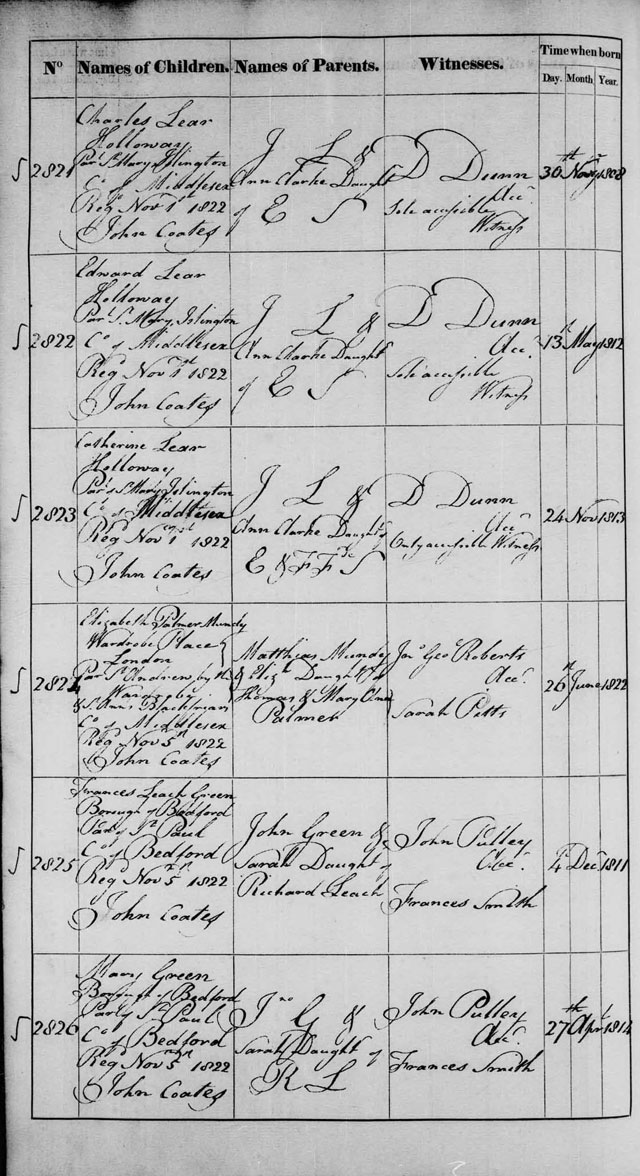 The Lear children’s registration in three successive pages in the “Register of Births at Dr Williams’ Library in Red Cross Street, Cripplegate, London registered between 1820 to 1824” (RG4/4664).

The national Archives website provides a description of the procedure to be followed to register births here:

The Protestant Dissenters’ Registry at Dr Williams’ Library served the congregations of Baptists, Independents and Presbyterians in London and within a twelve-mile radius of the capital. However, parents from most parts of the British Isles and even abroad also used the registry. Almost 50,000 births were registered in it. The register was started in 1742, with retrospective entries going back to 1716, and continued to 1837. The certificates used to compile the registers also survive. Parents wishing to register a birth had to produce two parchment certificates signed by their minister and by the midwife and one or two other people present at the birth, giving the name and sex of the child, the name of the parents, the name of the mother’s father and the date and place (street, parish and county) of birth. After 1828, paper certificates were required instead, which had to be signed by the parents as well; this made them more acceptable as legal proof. On receipt of the two certificates, the registrar entered all the details, except the address of birth, in the register, filed one of the certificates and returned the other to the parents with his certificate of registration. (“General Register Office: Registers of Births, Marriages and Deaths surrendered to the Non-parochial Registers Commissions of 1837 and 1857.” The National Archives website.) 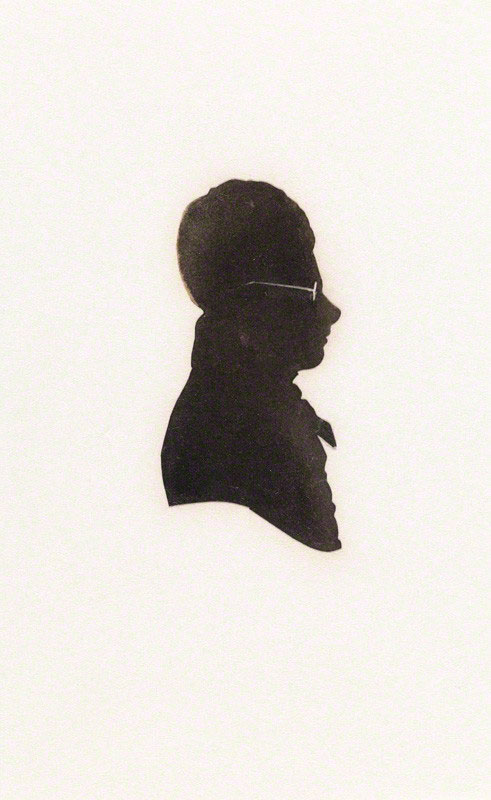 Edward’s companion silhouette to the above one of Catherine. NPG 1759.

It is easy to see that all children who reached adulthood were baptized and registered at Haberdashers Hall, the exception being the 1792 Sarah Lear, who was registered even though she died in infancy (no registration is to be found for the second non-surviving Sarah of 1793 mentioned in the list); the Lears evidently decided to wait a bit longer before baptizing their children: in the cases of Edward and Catharine, they waited almost three years, both being baptized together on 5 January 1815. When they decided to register the children with Dr Williams’ Library, in November 1822, considering that a “small fee” was required, they evidently opted for only presenting the parchment certificates for the surviving children.

So, what happened? How did the idea that the Lear siblings were 21 come to be? I would suggest that the main culprit is Edward himself with his statement in the letter to Fortescue; Lilly Bowen mentions the Lear correspondence that appeared at the beginning of the XX century several times in her letters to Angus Davidson and perhaps she was the one who tried to adjust the documents she had at her disposal so that they coincided with Edward’s statements: all the documents with 21 names which have come down to us passed through her hands.

On Dr. Williams’s Library: A Short Account of the Charity & Library Established under the Will of the Late Rev. Daniel Williams, D.D. London, 1917. (Archive.org)

3 Responses to “Twentieth of Twenty-one”: Edward Lear and his Siblings (3)