The following items fromHoughton Library have been added to the Manuscripts page:

Alphabet no. 6 : manuscript, undated. MS Typ 55.15.
For each letter there is a 4-line verse. A begins “Appaty, Bappaty, Appaty A /Two nice apples for me to day.” In the right margin there is a sketch, of 2 apples for A.
Incomplete: the letters Q to Z are initials only.
Online facsimile.

The cummerbund: an Indian poem. MS Typ 55.16.
Autograph manuscript in black ink. A note at the end including a glossary is crossed out.
Online facsimile. 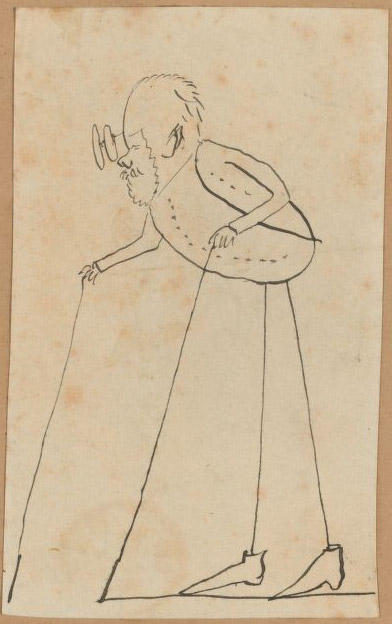 [‘Piggie’ confronting ‘corcadill’]. [18–]. MS Typ 55.19.
The real thing. With a slip reading: “Might you not bring back a small Corcadill for Piggie to play with on the Lawn at Stratton: –only he.” Part of a letter.
The back has a small picture of a hunter confronting an animal, the “Corcadill”?
Online facsimile.

“Better a Railing at the Top of the Cliff than a Hospital at the Bottom!”: the use of Edward Lear’s nonsense ABC as a didactical tool in the development of  pronunciation skills in young lerarners of English. A dissertation by Margaret Wallace Nilsson at Uppsala University Library, 2011. [pdf file]

This entry was posted in Edward Lear and tagged alphabets, Edward Lear, manuscripts, picture stories, self caricature. Bookmark the permalink.