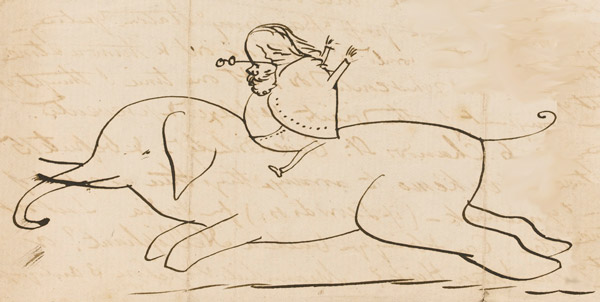 It seems I missed several more articles on Edward Lear:

Bookbird: A Journal of International Children’s Literature, Volume 53, Number 3, July 2015, edited by Michael Heyman, is a special issue devoted to Nonsense literature and includes an essay on Lear:

This paper offers a Bakhtinian analysis of Edward Lear’s limericks to reveal how from a dialogic perspective, the polyphony within the limericks draws readers’ attention to the ways language is used to construct, convey, and deconstruct social hierarchies and power relationships that traditionally depended on the unquestioning obedience and ignorance of children. In doing so, the paper also argues that Lear’s works exemplify anti-colonizing children’s literature that gives the child a voice and positions him or her as an active, decision-making participant in the process of interpretation. Dialogic engagement with the limericks allows the child to challenge strictures imposed by adult concepts of the child and children’s literature, without trying to indoctrinate the child reader into one way of conceptualizing self, otherness, and the social world. It is from the basis of Lear’s nonsense as innovative and radical that I extend a study of Lear’s limericks and their contribution to contemporary discussions of children’s literature. A dialogic analysis of Lear’s limericks reveals that they allow a space where anyone can laugh at and question dominant society because the critical gaze is deflected from the other to the self and dominant social attitudes and conventions.

There will also be a number of books on Edward Lear in the next months; Robert Peck e-mailed me some weeks ago to let me know that his “book on the natural history paintings of Edward Lear is completed and is now in its design phase.  We are looking toward a publication date of early 2016.”

Also ready, or almost, is the collection of essays from the Edward Lear conference of 2012: Edward Lear and the Play of Poetry, edited by James Williams and Matthew Bevis, will be published later this year by Oxford University Press.

Finally, a few months ago John Varriano let me know that he was working on a new monograph on Lear’s early days in Rome and the Campagna.