In a previous post I showed that Edward Lear was probably at least partially indebted to George Cruikshank for the frequently recurring osmosis between humans and animals, and I posted Cruiskhank’s Montrosities of 1821 as an example of extremely caricatural figures which might have inspired the Nonsense writer. The “Monstrosities” series also probably provided a model for Lear’s famously dancing characters: 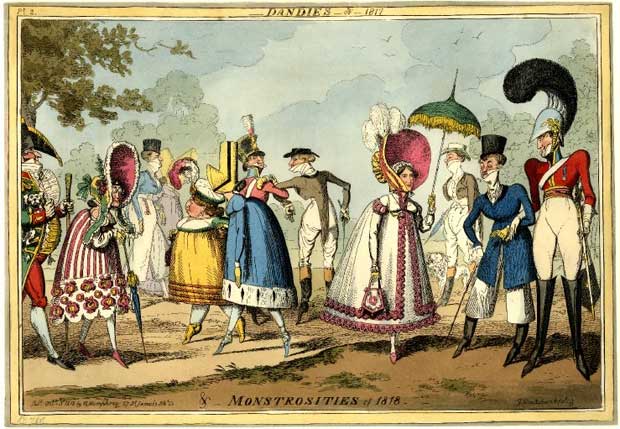 The British Museum description for this print reads:

A Hyde Park scene burlesquing the fashions of the day. Men walk arm-in-arm, so do two ladies, and a man and woman, and there are solitary figures, one of whom is a much-bedizened elderly woman using a sunshade as walking-stick, and followed by a pompous over-dressed footman (left) carrying a lap-dog and holding a cane. Alterations since 1816 include a fashion for walking on tip-toe; the ladies’ stoop (see Nos. 12939, 13084) is less pronounced; their skirts are longer; their bonnets much higher; their dresses are still very short-waisted and project from the shoulders, but they are less décolletée. The men no longer wear trousers gathered at the ankle, but two wear wide short trousers; two wear riding-breecheswith top-boots. All, including an officer in uniform, have the high waists, projecting busts, high shoulders, and tight sleeves characteristic of the dandy (cf. No. 13029); collars are still high, their corners are more often pointed than (as earlier) round. A Life Guards officer, arm-in-arm with a dandy wearing short trousers over spurred boots, is conspicuous on the extreme right. (M. Dorothy George, ‘Catalogue of Political and Personal Satires in the British Museum’, IX, 1949.)

It seems that walking on tip-toe was all the fashion among dandies, and not only in London; here is George Cruikshank’s A Peep at the French Monstrosities, le Palais Royal de Paris, also 1818: