A Choice Collection of Queens and Kings, and other Things

In February 2011 I posted a review of some Christmas books for 1874, “Nonsense for Big and Little Babies” from Judy. Among the books reviewed was A Choice Collection of Queens and Kings, and other Things by S.A. the Princess Hesse Schwartzbourg, which greatly intrigued me. It took me months to find a copy (it was actually offered to me at an almost-reasonable price), more months to have it decently photographed and many more months for me to cut, resize and otherwise edit the pictures, but I am now happy to be able to annouce that the full book is available for your perusal at nonsenselit.org. 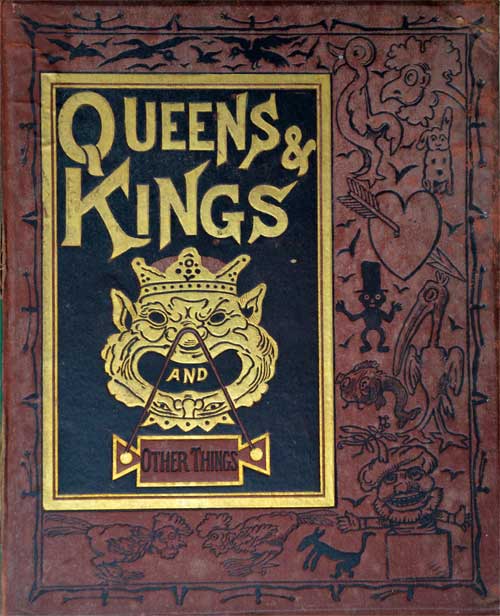 I was very surprised to find that the author was Marie Duval, a nom d’artiste for Isabelle Emilie de Tessier, usually mentioned as the artist who developed Ally Sloper, created by Charles Henry Ross.

According to Ellen Clayton “Miss Duval is probably seen at her best in coloured subjects, as, for example, in a nursery book published by Messrs. Chatto and Windus, called ‘Queens and Kings, and other Things,’ to which she contributed numerous grotesque subjects under the stately pseudonym of the Princess of Hesse Schartzbourg.” (Clayton, Ellen Creathorne. English Female Artists. London: Tinsley Brothers, 1876. Volume 2, pp. 330-333. Full chapter.)

Apart from what Clayton wrote, and she does not seem to be very reliable, very little is known of Marie Duval. According to the DNB, Isabelle Emilie de Tessier (“Marie Duval”) was born in Paris in 1850 or 1851 and married Charles Henry Ross “about 1869.” However, John Adcock, who appears to have checked the census records, confidently states that she “was 13 years old in 1861 and lived at 52 New Church Street, Marylebone, with her parents, Joseph and Adele. She was born in Marylebone, London in 1847.”

It is also unlikely that “Marie Duval” was married to Ross before 1871, as she was then mentioned in a divorce case as the lover of another actor:

In respect to the adultery, Mrs. Unwin stated that she lived in Nelson-square, Blackfriars-road, and in the summer of 1870 Miss Duval came to lodge in her house. After she did so she was visited by the respondent, who went by the name of Granville and often remained with her all night. In the autumn of 1871 she got so disgusted with their conduct that she had them both turned out of the house. The Court considered that both charges had been proved and pronounced a decree nisi with costs against the respondent (Adcock).

There may even have been no marriage; Charles Ross Jr., born in 1875, refers to Duval as “his [Ross Senior’s] wife,” and Clayton does not mention a marriage in her 1876 chapter on Duval. Adcock concludes that “she may have been living with CHR in a common-law arrangement although she was living as Mrs. Ross at the time of her death in 1890.”

Marie Duval’s death is registered in Wandsworth, London, in the second quarter of 1890, age 39, (she was actually 42). In the 1891 census CHR is living (as Charles Harry Ross) at 501 Wandsworth Road, Clapham, a widower and author. He has a son, Charles Jnr., aged 16, born in 1875 in Clapham, (other sources say Battersea), who is described as an artist (Adcock).

Duval and Ross were certainly acquainted by 1869, however, as she acted in some of his theatrical productions and her first contributions to Judy date to August 1869, when Ross was not yet editing the magazine. As soon as he became editor of Judy, Ross wrote to the Theatrical Journal, 30.1558, October 1869, p. 331, to praise Marie’s drawing style and anxious to distinguish it from his own:

Dear Sir, ― Will you permit me to correct a trifling error in your critic’s notice of the New Royalty Theatre, which unintentionally does an injury to a very clever young lady. Mademoiselle Marie Duval does contribute every week to Judy as your critic says, but her pictures are not imitations of “Mr C.H. Ross’s absurd style” and can very easily be distinguished from that gentleman’s production, because Mademoiselle is an artist and C.H.R. is not. ― I am, dear sir, yours very faithfully, Chas. H. Ross, Editor of Judy. Judy Office, 73, Fleet-street, Oct. 14.

Is this the young lady who periodically contributes to a serio-comic journal those grotesque pictures so abviously in imitation of Mr C.H. Ross’s absurd style that it is occasionally difficult to determine, with any degree of correctness, which sketches are by Miss Duval and which by Mr Ross?

The problem of distinguishing their styles persists, as the difficulty of attributing the pictures has led to her contribution to the development of Ally Sloper, “the first comic superstar,” being underestimated. David Kunzle, who has devoted several articles to her rediscovery describes her influences:

Models of the Duval Ally Sloper style were Richard Doyle […] the pioneer of a child-like outline style in his drawings for Punch, and Wilhelm Busch, creator of an artfully simplified caricatural style […] There are in Duval linear short cuts, degrees of simplified foreshortening, and a nonchalance in handling figures hurtling through the air, which can only come from the German artist. Unmistakable borrowings of Busch motifs, moreover, figure in both Ally Sloper and other Duval strips. (Kunzle, David. “Marie Duval: A Caricaturist Rediscovered.” Woman’s Art Journal 7.1. (1986): 26-31. 30. Also see “Marie Duval and Ally Sloper.” History Workshop Journal 21.1 (1986): 133-40; “The First Ally Sloper: The Earliest Popular Cartoon Character as a Satire on Victorian Work Ethic.” Oxford Art Journal 8.1 (1985): 40-48)

A Choice Collection of Queens and Kings, as well as her ‘associate’ Charles Henry Ross’s several books of rhymes, show Duval’s interest in Nonsense literature and a probable influence of Edward Lear, whose Book of Nonsense displays an even more radically simplified drawing style and shows people in highly unlikely attitudes. Duval, moreover does include a few limericks in the Queens and Kings: 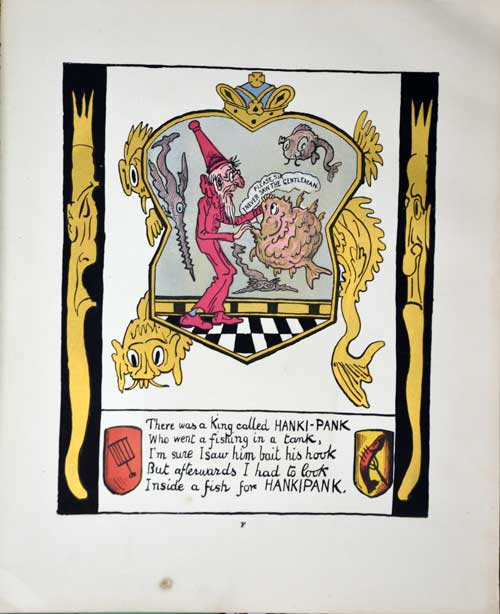 By the way, who does those horrid little woodcuts in Judy? The large cartoon is generally very good, and so are the sketches by Adelaide Claxton, but there are always a few wretched scratches signed “M.D.,” signifying “Miserable drawing,” I suppose, though some do say it stands for Marie Duval, or something of the kind ― which are frequently very bad “translations” of the piquant illustrations of Grevin and other artists in Le Journal Amusant and Le Journal Petit Rire, two serials for which I acknowledge a strong penchant. If “M.D.” cannot draw properly or with humour, he or she should be kicked out of Judy’s sanctum ― at least this is what I should command the publisher to do were I editor. But there is no accounting for tastes, and if some editors choose to show the world what dolts they can be, there are none to say them nay in this free and enlightened country.

Later in life, Marie Duval was generally presented as an example of an independent woman: Annie M. Hone, writing on “Woman’s Enterprise and Genius” in Myra’s Journal of Dress and Fashion, no. 5, 1 May 1888, p. 274, gives some information on young Marie Duval, without even mentioning her activity as an actress:

Isabelle Emilie de Lessier [sic] (“Marie Duval”) bagan her career of self-support as governess at the age of seventeen. A special talent being displayed in drawing caricatures, she contributed popular subjects to newspapers and magazines, being the first lady comic artist, and entirely self-taught. She has also supplied the illustrations for numerous books and been a constant contributor to “Judy.”

A few years after her death, Duval is again mentioned as a model for enterprising women, here too is her name spelled wrongly, revealing the source:

Art and Literature are sisters, and the artistic possibilities of women have come rapidly to the front of late years. To those cynics who declare women have little or no sense of humour, the postion of Mdlle. de Lessier (“Marie Duval”) is sufficient retort. She occupies a unique position as the first lady comic artist, showing the way to many whose talents lie in this direction. Her caricatures are full of subtle wit; and as she has been entirely self-taught, she is deserving of a peculiar gratitude, as proving the applicatiion of which most women are capable. It is to this power they owe their success. (F.H. “Women’s Work: Its Value and Possibilities.” The Girl’s Own Paper. October 27, 1894. 51)

2 Responses to A Choice Collection of Queens and Kings, and other Things