The following was recently sold at an auction by Fonsie Mealy’s. It contains Lear’s only colour self-portrait I have seen.

The sale also included some correspondence between a Mrs Elinor Wiltshire, the owner of the sheet at the time (1985), and Vivien Noakes trying to make sense of the picture, which is not very satisfactory, in my opinion:

“this his” is clearly written, but not easy to see in the image above, between the leaves and the picture of “a pea” (the green berry, peas in Italy are round and smooth and not attached to a stalk however) should give “’appy”, but then where does “peace-ful” come from? The “spray of pea blossoms” (if that is what it is) might resolve into “peas” = “peace” followed by “full seas” (the sea actually looks busy, with a steamship and a sailboat, as well as four fish, perhaps corresponding to the four people mentioned at the bottom?) and finally the explicit “on” in the last line

Here are the letters accompanying the image: 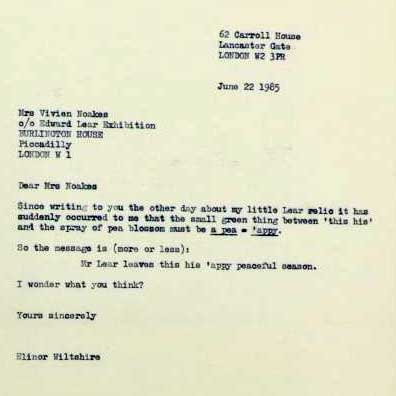 And the only passage available from Vivien Noakes’s reply, who I suspect intended to suggest that that the “berry” stood for “very”:

Thank you for sharing the coloured rebus. I have looked at it and don’t think the object below Lear is a pea. It looks much more like a plum to me. Peas, as you note, do not have stalks, and they are perfectly spherical.
I suggest ‘this his fruitful season’, or possibly ‘this his plum flowering season’. Lear was always most productive when the sun shone, like a plant. He got money from commissions and sales in the Summer to sustain him through Winter. A ‘plum’ in Victorian slang was a sum of money as well as a fruit or a synonym for ‘choice’, ‘desirable’.

This entry was posted in Edward Lear and tagged Comics, Edward Lear, rebus, self caricature. Bookmark the permalink.