I receive from the lucky owner of one Bavella sketch and publish (with some editing).

The drawings I am interested in are illustrated in Philip Hofer’s book Edward Lear as a Landscape Draughtsman, plates 72 & 95.

Both these drawings are of the Forest of Bavella, in Corsica, which Edward Lear visited in April 1868. 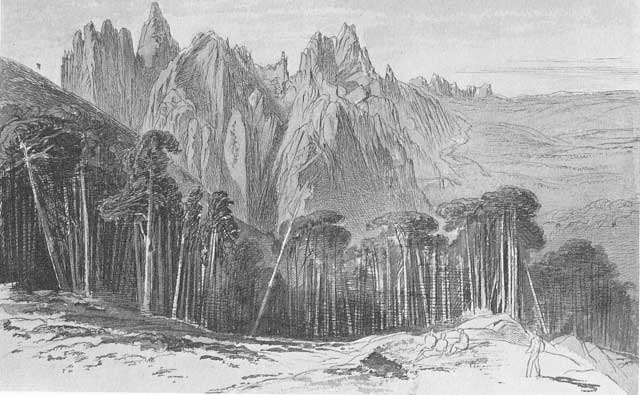 As Hofer explains (p.35), the drawing reproduced as his Plate 95 is a reduced version of his drawing Plate 72, and was made for transfer to the woodblock used as Plate 13 in his published Journal of a Landscape Painter in Corsica (1870). Hofer’s Plate 72 is larger, and, not belonging to the numbered sequence of drawings done on the spot, must be a fully worked up drawing made from a pre-existing sketch.

That pre-existing drawing doesn’t exist in the Houghton collection. I am now in a position to say that it is one of the drawings missing from the library’s numbered sequence – in fact number 128, made at 7.10am on 29 April 1868. This drawing belongs to me and I attach a digital image. It is larger than most of the Bavella drawings — at 13¾” x 20¾”. Copyright in this image does not belong to me but the copyright holders have given permission for it to be disseminated to third parties on the understanding that it won’t be used for commercial purposes.

As you will see, the mountain landscape in my drawing is virtually identical to the two versions mentioned above, though the trees in the foreground have been altered.

In December 1869, Lear, now living in Cannes, started painting two large Corsican oil paintings which came to be known as The Forest of Bavella and [The Forest of] Valdoniello. (see Lear’s diary entries for 21 Dec 1869 – 12 March 1870: Houghton Library MS Eng 797.3).

The Valdoniello is now in the Paul Mellon Collection at Yale. But the Forest of Bavella is in private hands in the UK and was for sale by Dickinson’s at TEFAF Maastricht 2020:

As you can see, the mountain landscape in the oil version of the Forest of Bavella is virtually identical to the finished drawing reproduced by Hofer as his Plate 72 (with the exception of the trees on the r.h. side) and my on-the-spot sketch (no 128).

I wonder do Yale know about the sale of the Forest of Bavella? It is exactly the same size as the Valdionello and the two were painted in tandem at the same time. They were clearly seen by Lear as companion pieces.

On leaving Corsica Lear returned to Cannes and that is where he probably did the ‘penning out’. Then, in December 1869, he began the two oil paintings — The Forest of Bavella and the other [The Forest of] Valdoniello — based on Corsican drawings. They are the same size, indeed a pair, and he worked on them simultaneously over a period of three months, until March 1870, when he sent them to London. The process can be followed through his diaries which are in Harvard and on line. I have extracted the relevant sections (see attached).