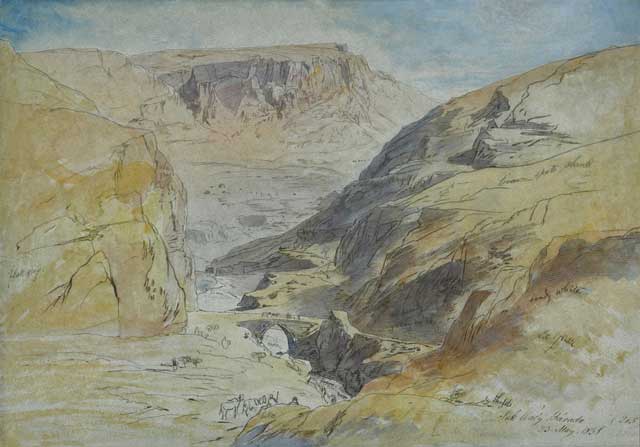 Exhibited
London, Agnew’s, 100th Annual Exhibition of Watercolours and Drawings, 1973, no. 155;
London, Sotheby’s, Edward Lear, An Exhibition of Works by Edward Lear from the D’Ayton International Collection, assembled by John D’Ayton, 2004, no. 16

On 23rd May 1858, whilst spending time at Baalbek during his tour of the interior of Lebanon, Lear visited the gorge at Suk Wady Barada and made the present drawing. At the end of the month he left Baalbek and travelled to Damascus. The journey took only a day and, in a letter to his friend Lady Waldegrave, he expressed regret at not being able to spend longer over it: ‘The day’s journey thence half way over Anti Lebanon, and the following journey down hither would be of great interest could more time be spent on the way’.1 He spent only a few days in Damascus, delighting in the ‘glittering city’,2 before leaving for Corfu.