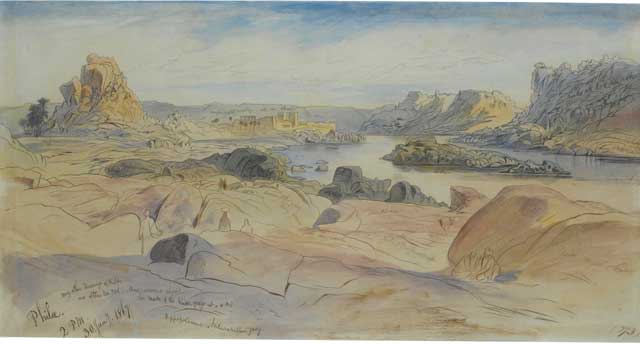 Provenance
With Agnew’s, London,
by whom sold to John, Lord D’Ayton (1922-2003);
thence by descent to the present owners

Exhibited
London, Sotheby’s, Edward Lear, An Exhibition of Works by Edward Lear from the D’Ayton International Collection, assembled by John D’Ayton, 2004, no. 22

The present watercolour is dated 30th January 1867. Taken from the rocky banks of the Nile to the west of the island of Philae, Lear appears to delight in his depiction of the dramatic landscape, while the Ptolomaic Temple of Isis and the Kiosk of Trajan are dwarfed by towering cliffs.
When Lear had last visited Philae, thirteen years previously, he spent ten days exploring the island and set up camp in the Temple of Isis. He developed a strong attachment to the area and described it as ‘more like a real fairy island than anything else I can compare it to. It is very small, and was formerly all covered with temples, of which the ruins of five or six now only remain. The great Temple of Isis, on the terrace of which I am now writing, is so extremely wonderful that no words can give the least idea of it. The Nile is divided here into several channels, by other rocky islands, and beyond you see the desert and the great granite hills of Assouan’.1 On his second trip to Philae in January 1867 Lear was even more impressed, describing it as ‘more beautiful than ever.’ 2
Lear executed over twenty oil paintings of Philae. One, which was clearly based on the present sheet, was sold at Sotheby’s, London on the 24th April 2012 (£37,250).
1. V. Noakes, Edward Lear Selected Letter, Oxford 1988, p. 124
2. V. Noakes, Edward Lear Selected Letter, Oxford 1988, p. 216