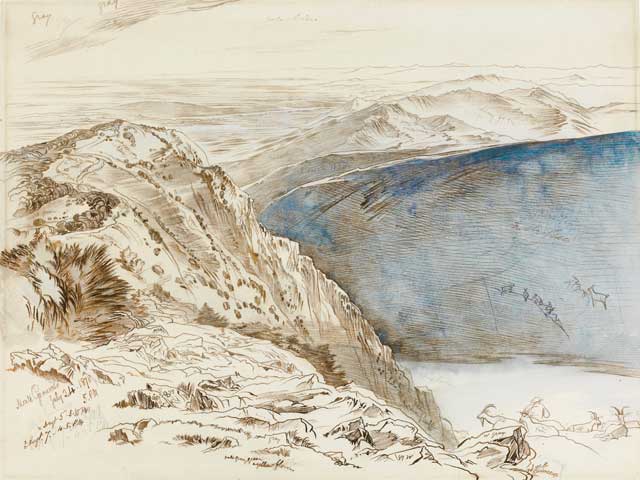 Monte Generoso is situated on the Italian-Swiss border to the west of Lake Como. Lear visited there for the first time in 1878 and was often to return during the summer months. He found the mountain scenery to be inspirational, and in a letter to his nephew he wrote that ‘the views near the hotel…are wonderful. There is one point from which you may (perhaps) see all the plains and lakes of Italy, besides the rivers Jordan, Mississippi & Amazon, the whole course of the Nile, – as well as the cities of Pekin, St. Petersburg & Copenhagen, not to speak of the straits of Jamaica & Joppa with the adjacent islands of Cappadocia, Ceylon and Islington.’1
Lear started work on the present work on 24th July, but the weather turned and the mountains were obscured by clouds. He returned twice more, on the 5th and 7th August, to finish.
1. V. Noakes, op. cit., p. 122, p. 36