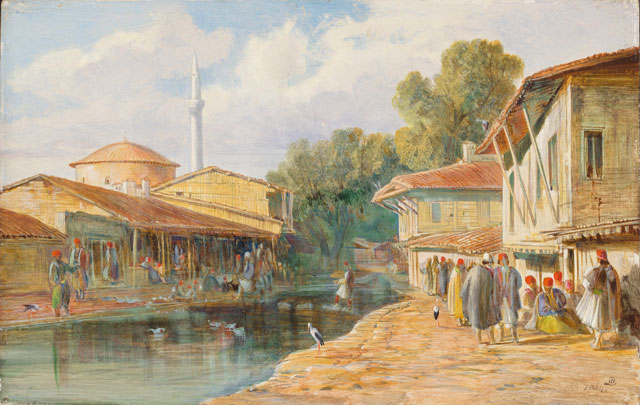 Lear travelled through Albania and Macedonia in 1848 and his journals of that time give an insight into the country and its customs during the 19th century. They detail some of the challenges and romance of travelling through a country previously unseen by many foreigners. He was particularly struck by the beauty of Monastir (Bitola): ‘the bustle and brilliancy….is remarkable…a river runs through the town…. either look up or down the river, the intermixture of minarets and mosques, with cypress and willow foliage, forms subjects of the most admirable beauty.’ (B. Destani (ed.), Edward Lear in Albania: Journals of a Landscape Painter in the Balkans, London, 2008, p. 21). Parga ‘from every point… lovely’ was observed to be ‘very unlike Albanian landscape in general’ (op.cit., p. 184) but rather closer to Calabria and Amalfi. Both the present paintings were worked up from sketches several years later, as Lear found working outdoors in Albania presented one unforseen challenge: many locals thought his activities the work of the devil and he was often driven away from his chosen vantage point.