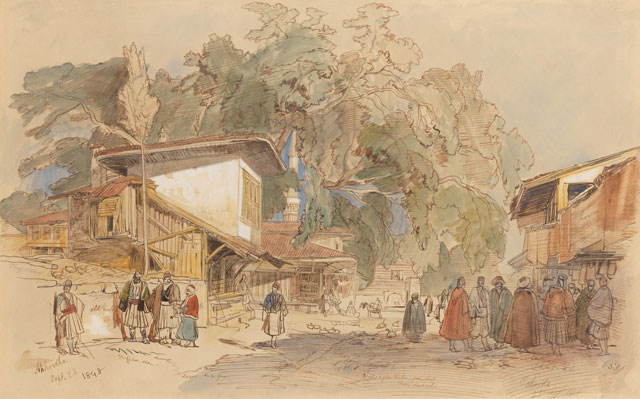 Lear set out from Salonika in Greece on 9 September 1848 on a three-month sketching trip; his journey was to take him in a north-westerly direction through Macedonia, into Albania and down its western coast. Travelling on horseback and sometimes on foot, he was accompanied by his dragoman Giorgio who acted as cook, valet, interpreter and guide. They generally stayed at the most rudimentary of roadside shelters along the way, carrying the basic necessities of bedding and cooking utensils with them, and whenever possible – weather permitting – Lear sketched the landscape and people that they encountered. The entry for his journal of September 20 describes a monotonous journey across a plain, but after scaling a mountain pass a very different landscape opened before them. They were approaching Akhridha (modern day Ohrid) and Lear wrote:

‘Soon a new world charmed the eye, and on arriving at the edge of the western face of this high ridge the beautiful plain and lake of Akhridha burst, as it were, into existence…it is scarcely possible to dream of finer scenes than these, their beauty perhaps enhanced by grand storm effects, which gave them more than ordinary magic of colour and variety of interest….Such sublime scenery obliterated from the memory all annoyances of travel and astonished and delighted at every step…Of many days passed in many lands, in wandering amid noble scenery, I can recall none more variously delightful and impressive than this has been’.

Lear was so taken with the town of Akhridha that he spent three days there, remarking in his journal not only on the beauty of the place, but on the unusually lovely local costumes. The present drawing was made on the last day of his stay, September 23 and his journal note records it in detail:

‘There is a street scene below the castle, where a majestic plane shades bazaars rich with every sort of gay-coloured raiment. Through its drooping foliage gleams the bright top of a minaret and below it are grouped every variety of picturesque human beings. To carry away a sketch of this was the work of half the morning.’

Lear’s subsequent journey through Albania was often uncomfortable and the weather was not always kind to him. His sojourn in Akhridha stands out as one of the more enjoyable episodes along the way, despite an incident on his last afternoon when he incautiously decided to sketch some women washing clothes by the lake and was pelted with stones as a result. His main concern was for his spectacles which fortunately survived the attack.

The Giorgio that accompanied Lear in this journey was not Kokali, who entered his service in 1856, but a Giorgio Bulgaro Cozzacchi. Lear writes to Charles Church on 10 November 1848:

I have been most fortunate in my man ― Giorgio Bulgaro Cozzacchi ― and have had no one fault to find with him in two months.