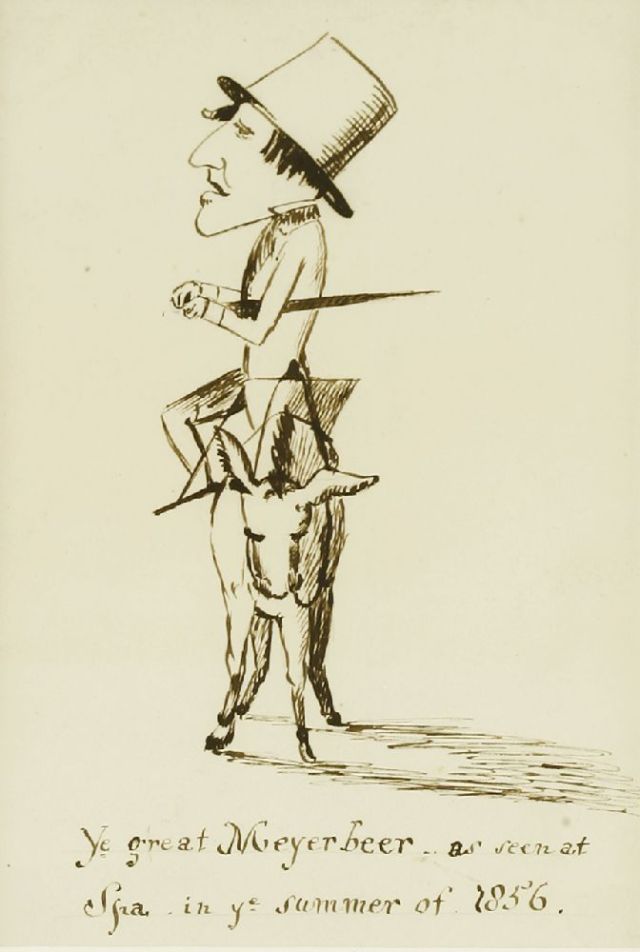 The label on the back of the picture attributes this to Edward Lear, and actually the drawing style — while a little too “finished” — is not dissimilar: the handwriting however does not look like his.

The auction house prudently chooses to attribute this to a “follower of Edward Lear.”

Provenance: From a Prescott / Decie family album (by repute)

Notes:
From 1829 to 1860, with few exceptions, the famous German maestro Giacomi Meyerbeer passed the summer months at the popular resort town of Spa in Belgium. Every afternoon at six o’clock he went for a donkey ride. During the 1850s the loyal donkey tender who supervised his daily outings was Henri Dedoyard. These excursions became a part of localfolklore and also the subject of a poem written by Émile Frossard entitled “L’âne de Neyerbeer” (“Meyerbeer’s donkey”).

Lear may have observed this spectacle, which would undoubtedly have appealed to his sense of the absurd, whilst en route to or from Ionia in 1856/57 or may have been provided wieth a description pf the scene by his elder sister Ann (1791-1861), who was based in Belgium at this time.