[I prepared this post together with the one on the portrait of nine-year-old Edward Lear by his sister Ann over three years ago, but then inexplicably forgot to post it; like the previous one it is mostly based on material from the New Zealand collection that was brought to my attention by Charles Lewsen and photographed by Stephen A’Court. I was recently reminded of it when I received further information clarifying the Lear family-Frederick Harding connection unearthed by Steve Uglow: I am enclosing his findings at the end of the post.]

The New Zealand collection includes a second portrait, which Lily Bowen – the Lear family descendant who provided information to Lear’s first biographer, Angus Ddavidson – identified as Edward Lear; but, as Vivien Noakes demonstrated , Lily Bowen’s family history was not always reliable, and pride in the connection with Edward Lear,  as well perhaps as failing eyesight, may have encouraged  her to  suppose that he  was the young child depicted in this portrait:

The label on the back reads: 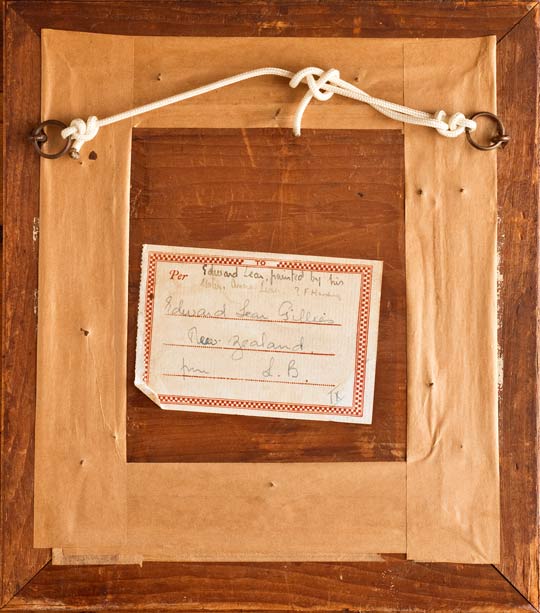 The picture itself, however, has an “FH 1830” signature inside the right arm of the chair, which rules out the attribution to Ann as well as the possibility that this is a portrait of Edward, who in 1830 would have been 18.

As the picture was passed among the descendants of Sarah Street – Edward Lear’s sister who emigrated to New Zealand in the 1853 – it seems possible that it depicts her son Charles Henry Street who was born on 28 March 1824, and would therefore have been 6 in 1830.

The signature ‘FH’ – as well as the back label – suggests that it may be the work of Frederick Harding who, according to Vivien Noakes (2004 edition, p. 218), being his mother’s sister’s child, was Edward’s cousin. Harding, a miniaturist, obtained prizes from the Society of Arts in 1814 and 1815. He exhibited in London at the Royal Academy and at the Society of British Artists from 1825 to 1857. He practised in London and, towards the end of his life, in Totnes.

Here is an example, among the many aailable on the web, of Harding’s work from ArtPrice (also): all those I found are watercolours on ivory, with signatures which do not at all look like the one on the above portrait, though perhaps this is to be expected, given the different medium, and the fact that Charles Street’s portrait may have been done quickly as a favour to relatives:

On Easter Monday, 8 April 1822, after Frederick had been “bought out of his regiment and was staying at Bowman’s Lodge” (Noakes, p. 218, who gives no source) something happened which Edward would never forget; on hearing of his cousin’s death in 1871, he wrote in his diary:

He marked the date in the diary entry for 8 April 1882, drawing a box around the passage:

Four years later he was still looking for confirmation of the date:

Whatever happened in 1822, it had no consequences on the relationship between the Lears and Frederick Harding: in June 1825 (the date is given in the caption to the reproduction in Noakes’s biography) he was painting Jeremiah’s miniature portrait, which is also part of the New Zealand collection: 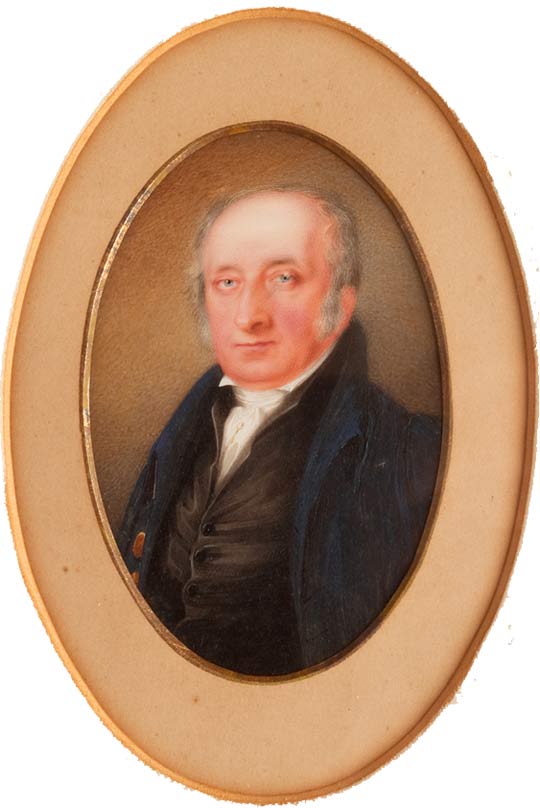 It is not surprising that Lear did not find Harding’s miniatures attractive when he examined them in 1866 – apparently there were others, and perhaps not all by Harding:

[What follows has been written by Steve Uglow, researching “Lear’s cousins” for the upcoming biography from his wife Jenny:]

Anne Clark Skerritt (or Skerrett) [Edward Lear’s mother] was born around 1769 – when she died at Dover on 26th May 1844, she was in her 75th year, the relict of Jeremiah and, like Jeremiah, late of Milton, Gravesend, Kent. She married Jeremiah on 24th August 1788.

Ann was the daughter of Edward John Skerritt and Florence Usher who had moved to London from Durham. Ann had 3 siblings

It’s Sarah, Edward Lear’s aunt, who provides the link to Frederick Harding. On 4th July 1789, she marries George Harding at St John’s, Hackney – one of the witnesses is Ann Skerritt – although by now she is married to Jeremiah. George  Harding was born around 1763 and died on 30th August 1818 in Whitechapel.  The baptismal records of their children include:

After George’s death, the census evidence from 1841-1861 suggests that Sarah remarries to a Mr Knight. In all three census years, Sarah is living with Frederick and in 1851 and 1861 is referred to as ‘mother’. When Lear talks of ‘Aunt Knight’ (and perhaps Aunt Kitty?), it is Sarah to whom he is referring.

Frederick went into the army but after George’s death he was bought out in 1822. He became a miniaturist – the websites of some auction houses say “active 1814-1857”.

There was a Harding dynasty of miniaturists and paints – Silvester Harding (1745-1809) from Staffordshire and his son George Perfect Harding (1780 Malling, Kent -1853 Newington, London). Possibly Frederick was a pupil of George Perfect, although clearly not his son. George Perfect married Mary Thornton in 1804 and they had a son, Frederick John, baptised at St Martin in the Fields on 23rd November 1815. It is not clear what the link was between George Harding, Frederick’s father, and George Perfect.

What is clear from the census record is that Frederick was an artist and miniaturist. In 1841, he was living in Chingford, Essex, occupation was artist and he was aged 40. Also in the house is Sarah Knight, independent means. Frederick marries quite late in life – in the 3rd quarter 1849 to Martha Steele Perkins in Exeter. The couple, with Sarah Knight, were in Woodford Green, Essex in 1851. Frederick is described as a portrait artist and born 1801 in Hackney. Martha S. was born 1825 in Exeter.

By 1861, they have moved to south west London, to York Lodge, Richmond Rd, Twickenham. Again Frederick is described as a miniature painter and this is repeated in 1871. Frederick dies in the second quarter 1871 and his death is registered in Brentford. In 1881, Martha is living at Blenheim Place, Marylebone .