Posted on February 5, 2016 by Marco Graziosi 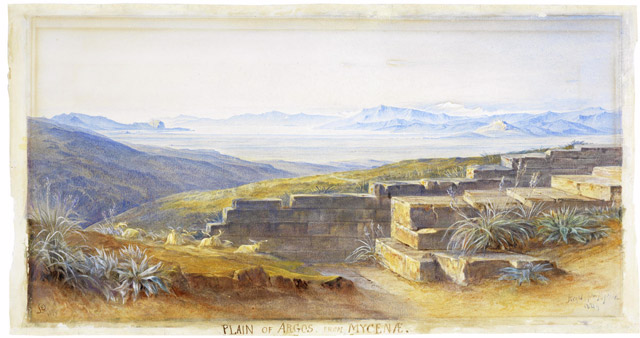 The present lot is one of a number of similar views that Lear produced from sketches made during a trip to Argos in the spring of 1849. Executed in 1879, it predates a watercolour of the same subject, 10 ¼ x 20 ½ in., which was sold at Christie’s London, 30 March 1993, lot 84 (this may be the work acquired by the Chazen Museum of Art, Madison, Wisconsin in the same year, although that work is listed as being 19 x 28 in., in the Museum’s records), as well as a large oil of the same subject, 31 ½ x 64in., now in the collection of Trinity College, Cambridge, which was painted in 1884.

Charles Church, later the Dean of Wells, met Lear in 1847; the two men were to become lifelong friends, and Church amassed a considerable collection of his Lear’s work. They embarked on a tour of the Peloponnese in the autumn of 1848, Church acting as guide and interpreter. The trip was a litany of misfortune; firstly, Lear fell from his horse, badly injuring himself, then he had a severe reaction to an insect bite which made him seriously ill; once he recovered, Lear planned to meet up with Church to visit Mount Athos, but the area was closed to travellers due to an outbreak of cholera.

Lear returned to Greece in the spring of 1849, with another great friend, Frank Lushington, a trip that the artist remembered with great fondness, describing, in a letter to his sister ‘a mile of bright scarlet ground. Then half a mile of blue or pale pink… the whole earth is like a rich Turkey carpet.’