In his Course in Nonsense Tom Swifty comments on the feud between Learians and Carrollians:

The nonsense of these two could not have been more different. We can make fun of rules by blithely ignoring them, like Lear, but also by following them too much to the letter, like Carroll. The nonsense of Lear is irrational and gossamer, while Carroll’s is hyperrational and hardcore.Within the genre there is indeed a bit of s schism between the fans of Lear (often artists) and the fans of Carroll (often scientists). Even some biographers cannot bring themselves to mention the other master of nonsense more than once or twice in passing. The combined works of the two nevertheless went on to form the canon of the genre (53).

As I clearly belong to the Lear party I am afraid I have often committed a sin of omission by not reporting on Carroll’s news (this year marks the 150th anniversary of the first Alice book, a fact I never once mentioned so far): the fact is Carroll has so many fans and there are so many events that it is impossible to keep track of them.

However, I cannot omit reporting on the appearance online of one of Carroll’s early family magazines, for which we must thank Houghton Library. Here is a link to the finding aid for the Harcourt Amory collection of Lewis Carroll (MS Eng 718 – 718.16), which includes a link to a full online facsimile of The Rectory Umbrella (MS Eng 718). 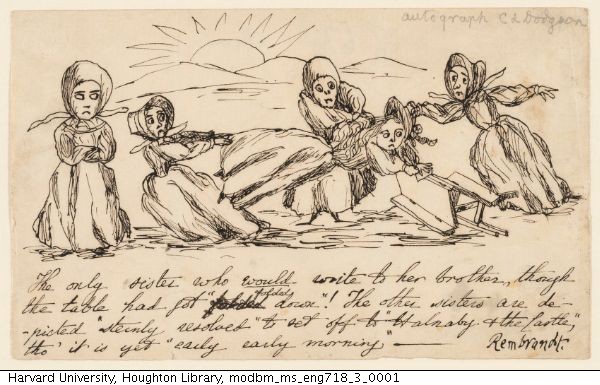 Let me conclude by mentioning that a guide to a “Franklin Lushington photograph album and other material, 1829-1871” (MS Typ 1181) is also now online, though without scans: this does not have much of learian interest except an 1858 photograph taken in Corfu; here is the description: