Edward Lear, Another Letter to Vincent (with Self-Caricature) 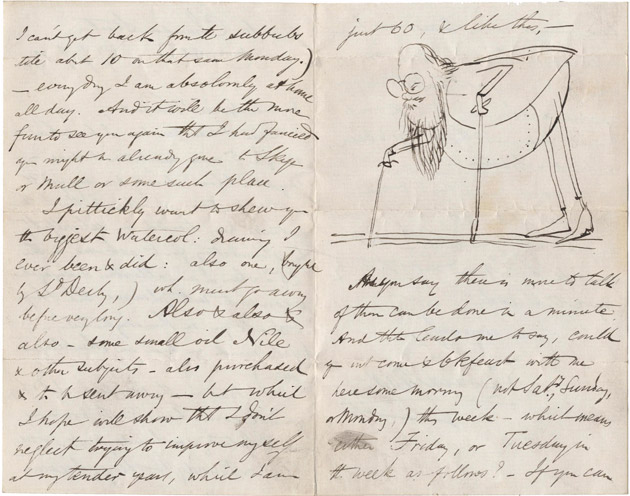 Edward Lear, ‘I am just 60, & like this’ a fine self-caricature of the aged Edward Lear, soon after completing “the biggest Watercol: drawing I ever been & did”. The recipient, Spencer Vincent (1825-1889), was himself an accomplished amateur artist; a memorial exhibition of his work, mainly paintings done in the Scottish Highlands, being held at the Burlington Fine Arts Club in 1890. For Lear’s letters to and about his dog, Fan, see the previous post.

Autograph letter signed (“Edward Lear”), to his friend Spencer Vincent (“My dear Spencer Vincent”), illustrated with a portrait of the artist at sixty, bent horizontal and supporting himself on two sticks, and asking him to come and see his pictures (“…I pittickly want to shew you the biggest Watercol: drawing I ever been & did: also one, (bought by Ld Derby,) wh. must go away before very long. Also & also & also – some small oil Nile & other subjects – also purchased & to be sent away – but which I hope show that I don’t neglect trying to improve myself at my tender years…”), 4 pages, last leaf dust-stained, 8vo, Chandos Street, London, 17 July 1872.

This entry was posted in Edward Lear and tagged Edward Lear, letters, self caricature, watercolours. Bookmark the permalink.

1 Response to Edward Lear, Another Letter to Vincent (with Self-Caricature)