Thinking of ‘snail mail’ brings to mind two pictorial letters from the great Victorian nonsense poet and illustrator Edward Lear, who was as idiosyncratic a letter writer as his American contemporary Emily Dickinson. 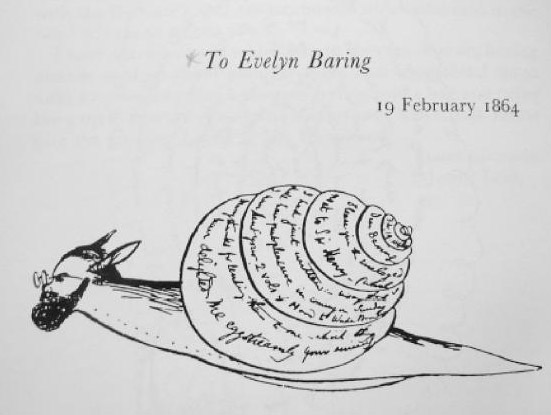 The first of these is a brilliant epitome of snail mail. The text of this note to Evelyn Baring of 19 February 1864 winds itself around the shell of a snail that bears not only the words but the bearded features of its author (Noakes 194). Lear was a traveller, topographical painter and travel writer and this letter is both a traveller’s text and a travelling one. Snails may be slow but they travel, and this bearded and bespectacled snail bears not only the name of its addressee — someone actually called Baring — but a portrait of the letter writer as middle-aged snail. As stamps bear the head of the monarch, the letter bears the head of its author. This comic self-portrait in letter form tells us something about the form of the letter, about its materiality, its mimetic relationship to its author and its essential mobility (however slow).

Lear was an often dazzling letter writer and his correspondence shimmers with the playfulness that went into his verse. ‘Letters are the only solace of my life at present, except sardines and omelettes,’ he told Lady Wyatt in December 1870, while in 1861 he said his letters ‘would be quite as fit to read 100 years hence as any body else’s naughty biography’ (Noakes 226). Another letter to Marianne North of June 1871 includes a series of images illustrating his reception of one of her letters (230-2). They show him finding it ‘insufficiently stamped’, then executing ‘a rapid Stampede to the Post Office’, delivering ‘an extampary and affecting discourse’, and concluding with a triumphant image, in which ‘Mr Lear stamps and dances for joy in securing Miss North’s letter’. Each illustration includes a different kind of ‘stamp’ and the sequence dramatises a complex dance of relatioships that is both ritualised and ‘extampary’, a word that suggests both ‘extempore’, officially franked, and bearing the author’s energetic personal stamp. It turns the receiving of the letter into a tour de force of writing and illustrates the crucial interdependence in all correspondence of writing and receiving, posting and reading. Like Keats and Dickinson, Lear often enclosed poems with his letters, circulating them among friends prior to publication. Indeed his letters with their blend of nonsensical play, travel writing and biography, are the best guide to the world of the Dong with the Luminous Nose, the Pobble who has no toes and his other nonsensical protagonists. Lear wrote a poem entitled ‘How pleasant to know Mr. Lear!’, and the letters give his readers a pleasurable sense of the displaced poet within his far-flung social worlds, transforming our sense of his dancing, unhappy and ‘extampary’ poems. 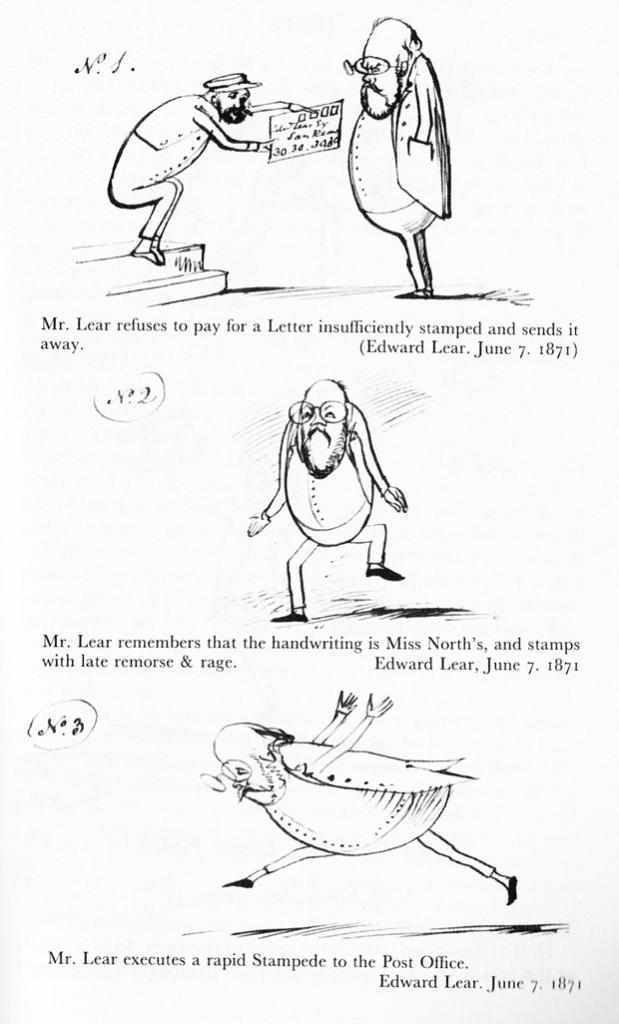 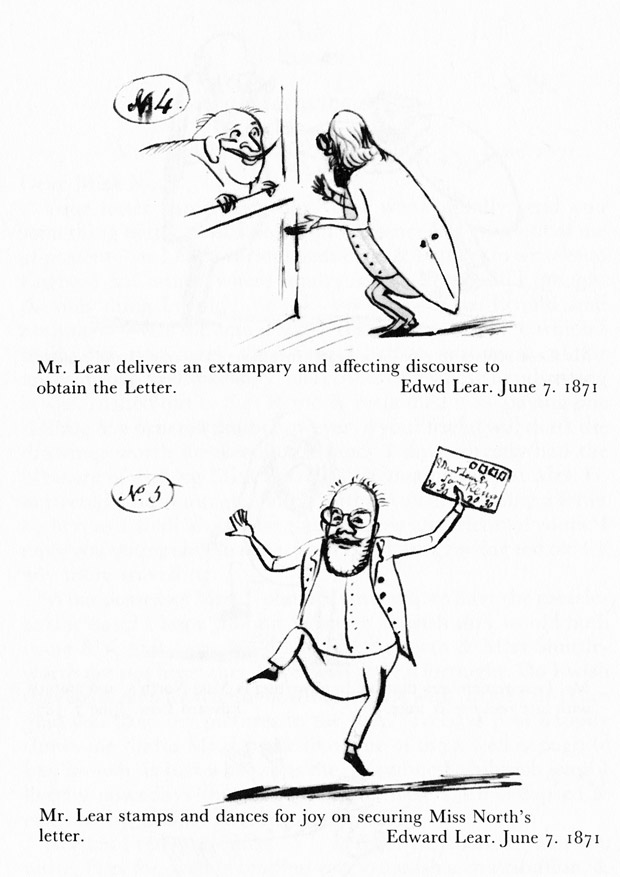 Unlike ‘How pleasant to know Mr. Lear!’, the late poem ‘My Agèd Uncle Arly’ doesn’t purport to be autobiographical. Nonetheless it is quoted in a letter of 4 June 1884 to a Lear’s friend Lord Carlingford with the following introduction:

O my agèd Uncle Arly!
Sitting on a heap of Barley
Through the silent hours of night!
On his nose there sate a cricket;
In his hat a railway ticket —
But his shoes were far too tight!
Too! Too!
far too tight! (Strachey 212)

As John Byrom [Thomas Byrom?] has pointed out, the name ‘UncLE ARly’ includes (albeit ‘unclearly’) the letters of the author’s name, ‘Lear’, but this letter explicitly equates the author and his avuncular protagonist as well as relating the tight shoes to the letter writer’s feet (the letter also includes a drawing of a swollen footed Lear hobbling on ski-like crutches). In March 1886, Lear sent a copy of the completed poem to Ruskin, prefaced with an allusion to Gray’s ‘Elegy’, ‘E’en in our ashes’ (echoing ‘E’en in our ashes live their wonted fires’), and saying he esteems it ‘a thing to be thankful for that I remain as great a fool as ever I was’. Two days later, sending it to the wife of a doctor, he describes it as ‘the last Nonsense poem I shall write’, calling it ‘stuff begun years ago for Lady E Baring’. According to his editor Vivien Noakes (who doesn’t quote the letter to Carlingford), on 5 March he made twelve copies to send to friends, as well as referring to ‘another poem about the same ingividgual’, recorded as an ‘Incomplete MSS — found in the brain of Mr Edward Lear on dissection of the same — in a post-mortem examination’ (Noakes 546). Such letters confirm the live role of the epistolary audience in the composition and distribution of his nonsense poems, whose primary audience was a network of friends. However, they also anticipate our post-mortem sense of this most ‘ingividgual’ of artists and poets, as he reframes the poem autobiographically for different correspondents.

Taken together, Lear’s images — with letters like these — remind us that every letter is part and parcel (rather like a parcel) of a larger social network, a textual response that is designed to provoke a response. In any exchange of letters the writer is always a reader and the reader a writer, and I want to suggest this is true in a different sense of poems, which are also never private and always circulate within a larger system of exchange which gives them meaning in their own time, and then after the death of the author in ‘post-mortem examination’. James Wright wrote in a letter to Donald Hall that ‘friendship is everything. It may not be entirely why we write our poems. But it is certainly why we have the courage to give those poems to each other’ (455). Manuscripts aren’t found in any brain, of course, but the manuscripts of letters like Lear’s are taken up into Derrida’s archive where they will inevitably be read in relation to the mind of the dead author and his friends, forming a crucial archival embodiment of his mental and corporeal life.

This is an interesting reading of a few of Edward Lear’s letters, but some references are inaccurate, i.e. those to Noakes are to Vivien Noakes’s edition of Lear’s Selected Letters, except (Noakes 546) which clearly refers to her edition of The Complete Verse and Other Nonsense, which does not appear in the bibliography; moreover, Haughton does not clearly state that the letter on “the same ingividgual” is to the Reverend E. Carus Selwyn (from Selected Letters 280) and does not read exactly as he quotes it:

After I sent your letter to the preconcerted predacious Poast — I remembered your wish to know about ‘Uncle Arly’ ——— of which Wilkie Collins writes to me that he thinks it the best of all ‘my poetry!’ ——

There is another pome about the same ingividgual begun — but shunted —

‘Accidental on his hat, ——
‘Once my Uncle Arly sat:
‘Which he squeezed it wholly flat.’

(Incomplete MSS — found in the brain of Mr. Edward Lear on dissection of the same — in a post mortification examination)