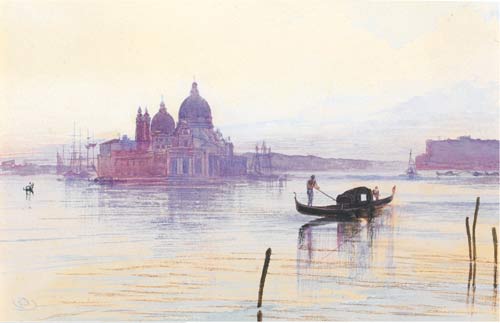 Edward Lear, Santa Maria della Salute from across the Bacino, Venice.
Watercolour over pencil heightened with touches of bodycolour; signed with monogram lower left. 115 by 175 mm.

The present watercolour dates from Lear’s second trip to Venice in November 1865. He first visited the floating city in 1857, but returned on his way to Malta to make studies for an oil painting which had been commissioned by Frances, Lady Waldegrave (1821-1879). Although he had not enjoyed his first visit there, he describes his 1865 trip in a far more favourable light. On the morning of 13th November, he rose early ‘had a cup of café noir in the hotel – and then got a gondola for the day. First drew S(anta) M(aria) de S(alute) by the Doge’s Palace – then from the Iron Bridge…but it was very cold.’1 The cold weather prevented him from completing his drawing and he returned to it on the 16th when he describes ‘the same bright gorgeous – but cold weather. Anything so indescribably [sic] beautiful as the colour of the place I never saw.’2
1. V. Noakes, Edward Lear 1812-1888, London 1985, p.116
2. V. Noakes, op. cit, 1985, p.116