In the letter to Angelo Maria Ricci I posted a few days ago Edward Lear refers to problems with his eyesight. Stephen Duckworth kindly e-mailed me about this:

I’ve just checked my list of (some of) his drawings by year and journey.   He was active in October 1844 – I’ve a record from Houghton of a drawing at Leonessa 3 October, but then the next dated drawings I have found (again at Houghton) are in March 1845 when he did a whole series in the Alban Hills, commencing with Cicero’s Villa on 3 March. He then did a fresh series in the Volscian mountains from end of March to early April.  Could either of these be linked to Virgil? 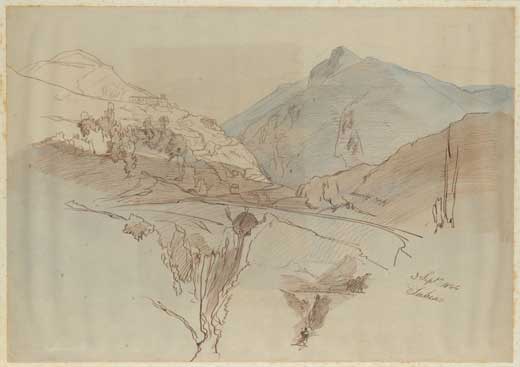 I could not find the Le0nessa drawing in the catalogue of digitized watercolours at Houghton, the last picture before 18 December (when Lear wrote) and 15 November (when the lost Ricci letter was written) is from Subiaco, dated 3 September. The next dated catalogue entry is Madonna del divino amore, 25 January 1845.

Both pictures might well be related to the Virgil project, as they are from the area around Rome where the events of the seventh book of the Aeneid take place, though the Madonna del divino amore is a very unlikely subject for such a work.