In the spring of 1863, just before the Ionian Islands were ceded to Greece, Edward Lear started a tour of the seven islands which would result in a book of lithographs, Views in the Seven Ionian Islands, published in December of that year. 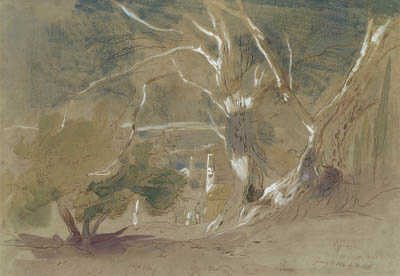 You can now follow his day-to-day progress across the archipelago at the Edward Lear’s Diaries blog. I have been looking for Lear’s sketches online and will add them whenever I can. For more on the Ionian Islands, see DT Ansted’s The Ionian Islands in the Year 1863. Ansted also appears in Lear’s journal (24.ii, 26.ii, 1.iii, and 7.iii 1863)  and thanks him for his help while visiting Corfu.

Also, I don’t remember mentioning this article from the TLS blog before: Edward Lear in Corfu, by Adrian Tahourdin.

I have recently posted two of Lear’s previously-unpublished picture stories (and more are to follow); if you are interested in the subject, Anna Henchman’s recent talk at INCS 2013, “Fragments out of Place: Body Parts and the Logic of Nonsense in Edward Lear,” discusses at some length one of the earliest-published picture stories: The Adventures of Mr Lear, the Polly and the Pusseybite. She has kindly sent me an abstract:

Like waste, nonsense is matter out of place. Rearranged body parts, dismemberment, beheading, and other forms of bodily distortion appear throughout Edward Lear’s nonsense verse. “Elastic” bodies are squeezed, broken, dissolved, smashed, and rolled up tight. Heads are giant, small, square, or “fanned off.” In “The Adventures of Mr Lear, the Polly and the Pusseybite,” three bodies are “dashed to atoms” only to be refastened: Lear’s head is stuck to the parrot’s body, the parrot’s head to a cat body and human legs, and the cat head perches on Lear’s armless frame. The rearrangement retains what Richard Owen defined as a “homologous” relationship in 1843: arms go where wings used to; heads replace heads. Lear’s acute awareness of relations–between parts and wholes, claw and hand, individual and species–grows out of his work illustrating animals and plants for Charles Darwin and others.
This chapter places Lear’s manipulation of bodies and words in the context of two Victorian preoccupations: comparative anatomy and the evolution of both species and language. It links Lear’s play with body parts to his rearrangement of parts in language: placing familiar morphemes such as “om-,” “-ferous,” and “-ible” adjacent to out-of-place roots. Bodies and words share several characteristics: they are products of evolution, can be broken into parts (organs, limbs, or morphemes), and function as individual units that are inseparable from the larger systems of which they are a part.
Lear’s bodily distortions make freshly visible the logic of ordinary bodies, a logic that distributes a set number of limbs to a particular species. He distorts bodies and words to destabilize everyday ideas about individuality and wholeness: that individuals are intact, autonomous, distinct from others, and easily categorized, and even that one can easily distinguish between wholes and parts.