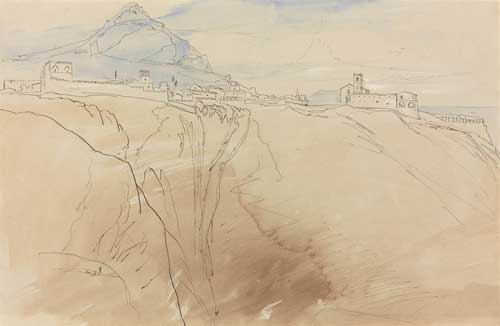 Edward Lear visited Sicily in the spring of 1842. He returned in the company of a young friend, John Proby, at the beginning of May 1847. The second visit coincided with a period of political upheaval, when it seemed likely that foreigners might soon be excluded from Italy. Lear resolved to spend as much time there as he could, starting in the south in Sicily.

In a letter to Chichester Fortescue written in October 1847 Lear told his friend that he had stayed at ‘Taormina the Magnificent’ for four or five days. The artist had been captivated by Taormina on his earlier visit and had drawn the classic view from the Greek theatre towards Mount Etna. To execute the present drawing Lear would have had his back to Etna – he is looking up at the town towards the rocky peak of Castelmola.