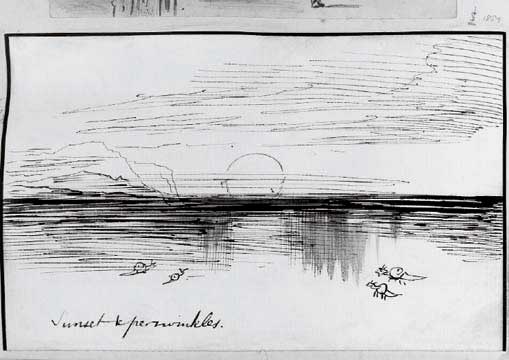 This enigmatic drawing by Edward Lear is from a set sold at Christie’s on 3 June 2003:

LEAR, Edward (1812-1888). An album containing 9 comic and other sketches in pen and ink (one in pencil), together with photographs of Lear’s villa in San Remo, and of other subjects: the drawings depicting parrots (three). a self-caricature with Foss (fragment of a letter), an owl smoking a pipe with a mouse in its claws, two small landscapes signed, ‘sunset and periwinkles’, and ‘ye hippopothamouse [&] ye crorkodile’, various sizes, 72 x 55 – 110 x 182mm; 11 photographs showing Lear’s villa and gardens at San Remo, others showing the graves of Lear and his servant, Giorgio Cocali, ‘Yews at Chichester given to me by Mr Lear at San Remo 1885′, and his drawing of temples on the Nile, 1895, and a small portrait photograph of his sister, Anne, ’30 March 1885’, various sizes, 120 x 115mm – 270 x 205mm, laid down in an album; together with approximately 98 photographs, circa 1885-1891, mostly of stately homes, interiors, street scenes, public buildings, places of natural beauty, and works of art in England, Ireland, France and Italy, various sizes; and a few other items, blank leaves (approximately 11 photographs damaged from pages being stuck together), in a late 19th-century album. Provenance. Mrs George Clive and by descent.

The Clives were longstanding friends and patrons of Lear: Ann Sybella Clive was one of the sponsors of Lear’s Indian expedition and visited him at San Remo. He corresponded with her, sending limericks and caricatures for her family. Her husband, George Clive, was a barrister and politician, and Under-Secretary of State for the Home Department from 1859-62.