Two Talks on Edward Lear in One Day

Tomorrow, 30 January, two separate events will mark the beginning of Edward Lear’s bicentenary celebrations. You will have to choose, if you are in London, don’t miss 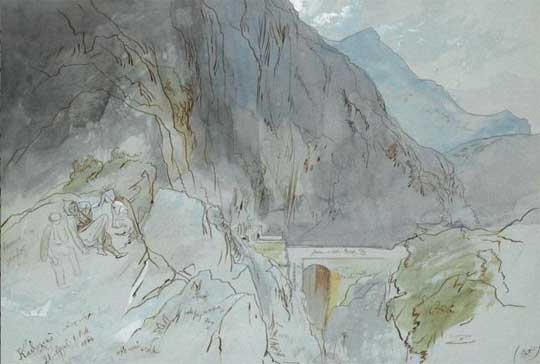 If you are in Oxford:

More details in the home page, or on Facebook.

When Edward Lear drew the picture above, in April 1864, he had just completed a three-month stay on Corfu. From that island he had travelled to Athens and then on to Crete, where he was to stay until June. In this on-the-spot drawing, the artist has depicted the so-called Katholiko Monastery, which lies in the dramatic but barren Akrotiri peninsula in northern Crete. Built in the tenth and eleventh centuries the monastery had been abandoned by the date Lear visited the region.
Pen and brown ink and watercolour over pencil heightened with white on blue paper,
Inscribed l.l.: Katholikó (Akrotiri)/ 21 April 1. pm/ 1864, numbered l.r: (25), and further inscribed with colour notes.