Edward Lear Album to be Auctioned

A previously unknown, at least to me, album of early Edward Lear drawings has emerged and will be auctioned on 23 June.

The description is not clear on how many of the drawings are Lear’s, it simply states that it is “probably by more than one hand,” which might include Lear’s sisters as well as other unidentified authors.

Among the pictures available online, the following one appears to be signed E. Lear, and might be part of the series of coloured birds in b/w landscapes I mentioned a few days ago. In this case, however, the landscape is limited to the immediate background. 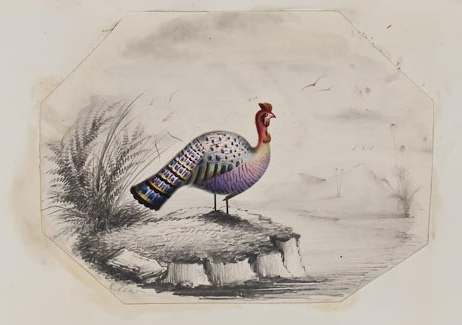 At least another one of the images seems to belong to Lear, though I cannot read the date: 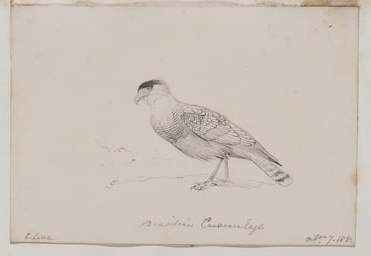 Below is the lot description, in case it disappears from the Liveauctioneers site:

Edward Lear (1812-1888) An album of early drawings and watercolours,
mostly botanical and natural history subjects, a few topographical views and figure studies, on rectos only of 62 leaves of Whatman wove paper watermarked 1827, probably by more than one hand, totalling over 80 images, some drawn or painted directly onto the leaf, others mounted on, including onto the front and back pastedowns, these mostly cut around in outline, also including 17 small engravings similarly mounted, several studies headed with its scientific classification, others more decoratively composed or placed under headings of other subjects, many inscriptions overmounted with the engravings and some later drawings, 1 botanical study signed with initials, 4 (1 flower piece, 3 birds) signed in full, of which the 2 more serious pencil bird studies dated October 1831, numerous other birds, flowers, butterflies, fish and animals, many in a closely comparable hand in both decorative and scientific styles, a pencil study of a small rodent inscribed Portrait of Mrs Gould’s Pet, the album in red half roan over marbled boards, 4to, c.1828-c.1832.

Provenance: from the natural history library of Pamela McKenna, née Jekyll (1889-1943), wife of the politician and banker, Reginald McKenna, and niece of Gertrude Jekyll, and thence by descent. The late Vivien Noakes, writing on Lear in the Royal Academy exhibition catalogue of 1985, states that the ‘earliest known of his work to have survived, dated c.1828, is an album of birds, butterflies and flowers (Houghton Library, Harvard University). The drawings follow the amateur conventions of the day’, (p.77). This album bears such remarkably close comparison to that album, in content, composition and binding, that it cannot but be from the same origin. Lear began drawing birds and animals in his teens, encouraged initially by his sisters, who may well have contributed to this album (the Houghton Library album is attributed to both Edward and Ann Lear), and then by his patron Mrs Godfrey Wentworth. She introduced Lear to Prideaux Selby who, in 1828, employed him on his Illustrations of British Ornithology, before he went on to work as an ornithological draughtsman for John Gould in the early 1830s. In the interim, Lear had also produced that extraordinarily precocious work, Illustrations of the Family of Psittacidae, or Parrots, in 1831 at the age of 19. This album comes from those formative years and, perhaps most fascinatingly of all, seems to have been revisited with later, more mature and scientific studies, however small, overlaying earlier juvenile work. Our thanks to Hope Mayo, Philip Hofer Curator of Printing and Graphic Arts, Houghton Library, Harvard University.

1 Response to Edward Lear Album to be Auctioned