The Frog and the Duck: A Romance

Posted on December 1, 2010 by Marco Graziosi

George du Maurier “took, in 1869-1870, a brief Darwinian respite from his usual labors of satirizing the Victorian drawing room” and, among other things, produced an “unusually extensive and charmingly anthropomorphic picture-story” (Kunzle 293), which appeared in three fortnightly instalments in Punch: April 10, April 24 and May 8, 1869 (vol. 56, pp. 146, 174 and 194). 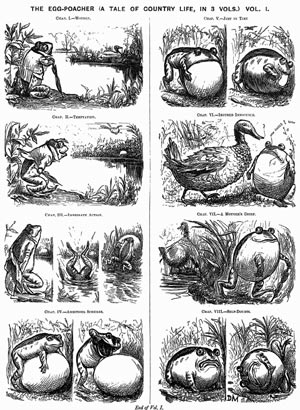 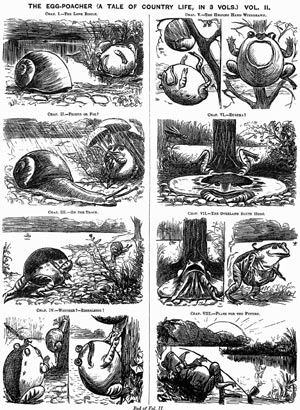 As Kunzle himself observes, the story is based on a complex set of reversals which involve social conventions (a marriage enforced by the female after the birth of offspring) as well as the natural order of things. In this respect the tale is not different from Edward Lear’s “The Owl and the Pussy-cat” with its final interspecies marriage.

Both stories end with the traditional marriage but, unlike Lear, Du Maurier emphasizes the less agreeable elements of interspecies relationships: the first two instalments are centered on predation — one of the most obvious manifestations of Darwin’s struggle for survival — and in particular on what Rose Lovell-Smith calls the “egg-thief motif”.

By 1869 the topos had already had a long history, going back at least to J.J. Audubon’s representation of birds’ nests under attack by serpents: plates 21 (Mocking Bird) and 116 (Ferruginous Thrush) of his Birds of America (1827-1838). It had been taken up in illustrations and natural-history books and perhaps used by Lewis Carroll in the Pigeon episode of Alice’s Adventure in Wonderland (chapter 5).

Lear, notwithstanding his experience as a zoological illustrator, appears less interested in the real-world interactions of the species involved: owls and cats, both preying on mice, are competitors, though in the extreme conditions imagined by Stewart Lee in his 2004 show Pea Green Boat they might well become enemies.

Du Maurier’s choice of a frog as the predator — a parodic version of the more aggressive serpents usually associated to the practice — is in itself a reversal of the natural order, as frogs do not prey on eggs while some ducks feed on amphibians. He then concludes the story by again reversing the predator-victim relationship, when the frog is first used to hatch the egg and then forced into marriage.

The story, however, also functions as a parodic reversal of a more traditional, non-evolutionary theme: it would be difficult not to see in the raping bird a burlesque version of Leda’s swan, again with inverted sexual roles: the duckling which emerges from the egg, while mostly like the mother, has the frog’s eyes and is therefore a hybrid.

Kunzle, David. The History of the Comic Strip: The Nineteenth Century. Berkeley: University of California Press, 1990.

See: George du Maurier, Stewart Lee’s “deconstruction” of The Owl and the Pussy-cat.

Here: The Frog and the Heron: A Different Sort of Romance.

6 Responses to The Frog and the Duck: A Romance