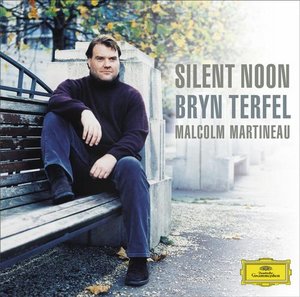 I first came across Karel Drofnatski’s name when reading a review of Bryn Terfel’s CD Silent Noon (DG 000289 477 5336 0, 2004) which includes arrangements of Edward Lear’s “There was an old man with a nose” (“The Aquiline Snub”) and “There was an old man of the Isles” (“The Compleat Virtuoso”). I was quite intrigued, so I also got On This Island (Hyperion CDA 67227, 2001) which I discovered included two more of Drofnatski’s arrangements. 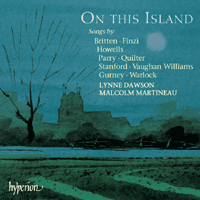 While checking the Edward Lear Discography today I decided to investigate a little and, as I suspected already, found that Karel Drofnatski was a pseudonym used by Sir Charles Villiers Stanford (1852-1924) for his arrangements of Lear’s limericks:

Last, but certainly not least in Stanford’s oeuvre, are the Nonsense Rhymes, settings of 14 limericks by Edward Lear, written for the amusement of his friends. The dates of composition are not known, nor were they published until 1960. The stratospheric opus numbers — 365-78 — are all part of the donnish humour. (In reality, Stanford’s opus numbers reached just under 200.) The work’s full title is ‘Nonsense Rhymes by Edward Lear set to music by Karel Drofnatski,’ a composer who was evidently born at a town on the River Yeffil in the province of Retsniel. (Anyone with a retrogradable turn of mind will quickly decode this.) The settings comprise a series of baroquely elaborate spoofs, each targeting a different composer or style and incorporating wittily embedded quotation, all explained in elaborate after-notes to each song. For example, ‘The Hardy Norse-Woman’ (setting the limerick ‘There was an old man of the Isles’) to ‘Max von Beetelssohn;’ ‘The Absent Barber’ (‘There was an old man with a beard’) to Handel (with help from Sir Henry Bishop); and ‘The Aquiline Snub’ (‘There was an old man with a nose’) to J.S. Bach (Ex. 2.17). There are also parodies of Brahms, Tchaikovsky and Wagner and an all-purpose ‘Limerich ohne Worte:’ ‘a specimen pattern or model, to which any poem of the limerick type can be sung.’ They are so much more amusing than the Irish humours of ‘Johneen’ and the like. But… one feels that when one prefers Stanford’s pastiches to his serious songs, then something must be amiss: that perhaps Stanford didn’t aim very high. (Hold, Trevor. Parry to Finzi: Twenty English Song-Composers. Woodbridge: The Boydell Press, 2002. 56-7.) 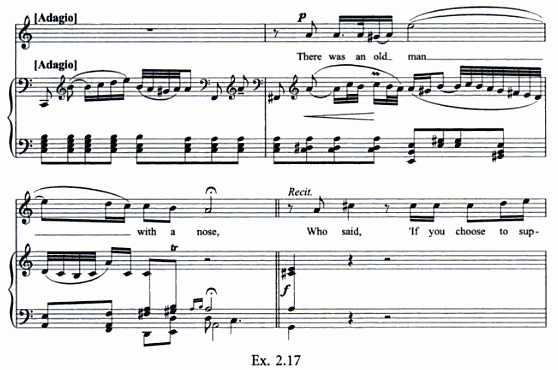 The 1960 edition of the manuscript was published in London by Stainer & Bell. The whole series has been recorded by Philip Lawson (baritone) and Howard Moody (piano) for VIF Records in 1997 in their Lyrics and Limericks CD.