Theodore Roosevelt‘s refusal, in 1902, to shoot an imprisoned bear spawned a long series of political cartoons and, since the bound animal was often represented as a cub, and brought to the creation of the Teddy Bear.

Roosevelt’s hunting mania was the subject of a 1909 booklet by Peter Newell, Jungle Jangle, and of one of the earliest animated shorts.

Gustave Verbeek‘s Terrors of the Tiny Tads, which ran in the New York Herald Sunday comics supplement from 28 May 1905 to 25 October 1914, did not usually refer to contemporary political or social issues, but did not miss an opportunity to introduce a “cowboysterous” “Kangaroosevelt Bear” in the stip for 21 April 1907. The arrival of this heroic chimera saves one of the Tads ― who, perhaps in honour of his saviour, becomes a “Taddy” in the next panel ― from the terrible Hippopotamuskrat: 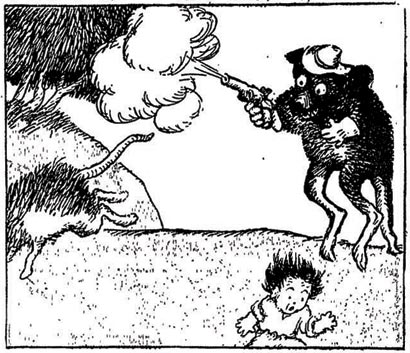 This entry was posted in Comics, Gustave Verbeek, Peter Newell. Bookmark the permalink.