Posted on December 3, 2008 by Marco Graziosi

Yale University’s Beinecke Rare Books and Manuscripts Library has scans of a few of their Edward Lear manuscripts online; the small collection includes self-caricatures taken from letters and original cartoons for the Nonsense Botanies, but also the full manuscript of “The Nervous Family,” a parody of an old song “augmented” by Lear.

Unlike Lewis Carroll, Edward Lear never published explicit parodies of other people’s poems, which is not to say that he did not write any. On the contrary, his early poems, starting with “Eclogue,” based on Collins’s “Hassan, or the Camel Driver,” are very often parodies. Lear was also fond of providing his own comic illustrations to popular poems (see my previous Irish Sources of Edward Lear’s Early Picture Stories).

Although he did not have a formal musical education, Lear also enjoyed singing at the piano; in later life he was quite successful with his arrangements of Tennyson’s songs (see Lear Vamping), a selection from which was published in 1859 (the entries in his Diaries for September-November 1858 record his collaboration with E.F. Rimbault to prepare this edition). As a young man in Knowsley he probably preferred lighter subjects to entertain Lord Derby and his guests, and in this context adding a few stanzas to a well-known comic song would have been a good idea.

I have been unable to find “The Nervous Family,” the “published song” Lear decided to add to, but it is mentioned in the advertising section of Comic Songs to Popular Tunes. Ninth Collection, by J. Beuler (London: J. Beuler, 1833) as having already been published by the same “J. Beuler, 4, Bury Place, Bloomsbury, London” in a collection of Songs with accompaniment for the Piano-forte.

The song, in any case, was the parody of an older one, “We’re a’ Noddin,” composed by William Hawes on a poem, two versions of which can be found in The Universal Songster; or, Museum of Mirth: Forming the Most Complete, Extensive, and Valuable Collection of Ancient and Modern Songs in the English Language. Twenty-nine Wood-cuts by George and Robert Cruikshank engraved by J.R. Marshall. Vol. 1. London: Jones and Co., 1834, 208:

О, WE’RE A’ NODDIN AT OUR HOUSE AT HAME.

O, WE’RE a’ noddin, nid, nid, nodding,
O we’re a’ noddin at our house at hame.
When the dame’s asleep, and the gude man’s fu’,
When lads love lasses, and lasses love so true,
Kate sits i’ the neuk, and her Jo sits by.
And the moon shines bright as the love in her eye.
And they’re a’ noddin, &c. 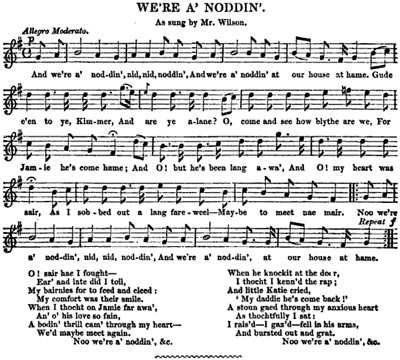 Hawes’s song was wildly popular in the 1820s, so much as to be the cause of a copyright-infringement case, as told in The Georgian Era: Memoirs of the Most Eminent Persons. Vol. 4. (London: Vizetelly, Branston and Co., 1834), 280:

“Mr. Hawes had previously acquired a deservedly high celebrity as the composer and harmonizer of various songs, duets, &c. On the production of Montrose, or the Children of the Mist, at Covent Garden, in February, 1822, Miss Stephens sang two songs arranged by Mr. Hawes, Charlie is my Darling, and We’re a’ Noddin. The latter acquired great popularity, and being pirated and published in one of the magazines, by Mr. Taylor, jun., Mr. Hawes applied to the lord-chancellor for an injunction; but after having, in support of his copyright, expended £120, and Mr. Taylor, in his defence, £70, the lord-chancellor (Eldon,) finally declared that he knew nothing of music, and left each party to pay his own costs!!”

Thursday, March 14.
In the Court of Chancery (Hawes v. Sams.) Mr. Shadwell applied to the Court for an injunction to restrain the defendant, Mr. Sams, from publishing the song “We’re a’ noddin, nid, nid, noddin,” which, he said, was an old song, but with new music arranged by the plaintiff. The defendant had thought proper to publish it in the monthly publication, called the “Gazette of Fashion,” with the precise music of the plaintiff. The Lord Chancellor said he had got the “Gentleman’s Magazine” from the first number down to the present, in each of which a song had been published. He did not like to cut up a book of this description because this song was in it. His Lordship refused the application. — A Motion has since been made in the Vice-Chancellor’s Court, but has met with the same ill success.

The song appears to have been very fashionable in the 1820s, when it was repeatedly published in different versions, but it clearly remained a favourite for a long time e.g. We’re a Noddin, with Variations for Flute, with an Accompaniment for the Piano Forte, by Wm. Card. London. Lavenu. (1824), Trois Airs variés pour la Piano-forte, par Henri Hertz. — No. 1. Partant pour la Syrie; — 2. La Swissesse au bord du lac; — 3. We’re a Noddin (1828), Thalberg’s fantasia on “We’re a’ noddin” (The Musical World, XXIX, 1851, p. 251) as well as the above-mentioned version.

Here, at last, is the text of Edward Lear’s manuscript:

For we’re all nervous, very &c.

My poor shaking Aunt can’t work at the needle,
And my shaking hand spills half my cup of tea.
When wine at her dinner my timid sister’s taking —
She drops it on the table, so much her hand is shaking —
And my poor old shaky Mother when to take her snuff she tries
To pop it in her nose, — she pops it in her eyes.

For she’s so nervous, very &c.

We all at dinner, shake – shake at carving,
And as for snuffing Candles, we all put out the light;
T’other evening after dinner we all to snuff did try,
But my Aunt couldn’t do it, nor my Sister, nor could I.
“Chill! Give me the snuffers!” said my Mother in a flout,
“I’ll show you how to do it!” – so she did, & snuffed it out,

For she’s so nervous,
very very nervous, — —
& we’re all of us nervous
at our home in town.

{Thus far is part of an old published song – the rest is mine. E.L.}

We’re getting much too nervous to go out to dinner
For we all sit a shaking, just like puppets upon wires.
I’m too nervous to speak loud, so I’m scarcely ever able
To ask for what I want, or to talk across the table; —
And my poor shaking Aunt where’er she sits, I sure to see,
Some sympathizing Jelly always shaking vis a vis, —

Which make her more nervous, very very &c.
And we’re all of us too –

We’re too nervous to get ready in time to go to church,
So we never go at all, since we once went late one day;
For the clergyman looked at us, with a dreadful sort of frown,
And my poor shaky mother caught his eye & tumbled down; —
And my Aunt & Sister fainted, — and tho’ with care & pain
We dragged them slowly out, — yet we’ve never been again –

And we’re all nervous, very &c.

Our nerves in stormy weather are particularly bad,
And a single peal of thunder is enough to drive us mad.
So, when a storm comes on, we in a fright begin
To lock ourselves in closets where the lightening can’t come in;
And for fear a little thunder to our nervous Ears should come,
We each turn a barrel organ, & my Mother beats a drum,

These last 3 verses were composed by me at Knowsley, 1836.

The Edward Lear version of the song was first published, together with an alternative, very different one which appears to take its metre from the original “We’re a’ Noddin,” in The Complete Verse and Other Nonsense (ed. Vivien Noakes, London: Penguin, 2001, 53) and has been arranged for chorus by Benjamin Lees and performed by The Young People’s Chorus of New York: you can listen to part of the song and buy the CD containing it at CDBaby (the song is also available on iTunes). A review of the concert reveals that Lees was also inspired by Lear’s limericks to compose the interesting-sounding Vocalise:

The Nervous Family, commissioned by Young People’s Chorus, introduced the young chorus to the stage, and a double bassoon accompaniment added to the mix. The students, in yellow, red, and lavender, with young ladies in scarves and young men in jackets, were theatrically ready, as they kept repeating the word “nervous” in a humorous and surreal fashion. Lees’ Vocalise, a world premiere, inspired by Edward Lear limericks, reconfigured the chorus, as they sang only a one syllable short-A vowel, over and over, in melancholy, but melodic tones.

This entry was posted in Edward Lear, Lewis Carroll, Podcasts. Bookmark the permalink.