In his recent book on the Father of the Comic Strip: Rodolphe Töpffer (Jackson: University Press of Mississippi, 2007), David Kunzle also discusses British parallels to the Genevan inventor of comics; among them a special section is devoted to William Makepeace Thackeray, in which Kunzle states that the Picture Magazine (vol. III, 1894) published one of Thackeray’s picture stories along with “some five illustrated limericks headed ‘Simple Melodies‘. The date 1832 on this sheet… puts Thackeray’s illustrated limericks well ahead of those famous avatars of nonsense verse printed by Lear in his first Book of Nonsense.” (p. 167). 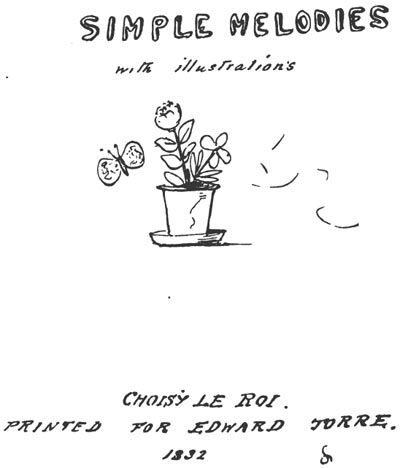 A quick look at the small images reproduced in an article by Thierry Smolderen on Coconino World’s Village des Auteurs (“Thackeray and Töpffer. The Weimar Connection”) convinced me that the Simple Melodies were not really limericks, though they looked a lot like them. Thanks to Google Books I have now found that the poems (six of them against the four shown in Smolderen’s article) were also republished as illustrations to the second part of an essay by Lewis Melville on “Thackeray as Artist” in The Conoisseur. An Illustrated Magazine for Collectors. Vol. VIII (January-April 1904), pp. 25-31, 152-5. Melville, by the way, is more precise than Kunzle and defines the compositions “nursery rhymes”.

While they are clearly not limericks, they consist of six lines with three different rhymes, they have a lot in common with Lear’s ones and were probably devised on the basis of the early limerick books of the 1820s:

That Thackeray was also inpired by that archetype limerick of the “Sick Man of Tobago” (from Anecdotes and Adventures of Fifteen Gentlemen. London: John Marshall, [1821]) is, I think, amply demonstrated by two of the six Melodies:

I humble to write
The fate of Tom Knight
For here the poor fellow’s in bed seen
And see how he takes
Instead of beef steaks
All sorts of the nastiest med’cine.

Miss Mary Knight
Has a small appetite
But Thomas her brother’s a glutton
For breakfast he takes
Two pounds of beefsteaks
And for dinner a leg of roast Mutton.

Further characteristics connecting Thackeray’s poems to Lear’s limericks are the interest in food shown in the examples above, as well as the informal, childish drawing style, in part no doubt due to the fact that Thackeray’s poems were not published, which is very different from the formal engravings typical of contemporary books and magazines. Thackeray himself liked to say that “he was not half so bad as the woodcutters made him appear” (Melville in The Conoisseur, p. 155), while Lear chose to use lithography as a means of maintaining his simple style.

Some of the Melodies also seem to follow the cautionary-tale tradition; in addition to “Good Dicky Snooks” above, which recommends study, the two remaining poems, like “Miss Mary Knight” above, celebrate moderation in eating:

Dear Suky Jones
Though all skin & bones
Has a slim & an elegant figure
But Miss Mary Grig
Is as fat as a pig
And each day she grows bigger & bigger.

Little Miss Perkins
Much loved pickled Gerkins
And went to the Cup board & stole some
But they gave her such pain
She ne’er ate them again
She found them so shocking unwholesome.

Bob Turvey, in the July 2008 issue of The Pentatette (“William Makepeace Thackeray: Writer of Limericks Pre-Lear?”, p. 6), criticizes Kunzle’s definition of Thackeray’s poems as limericks and he is certainly right; however, I can’t see much difference between the Simple Melodies and many other examples usually accepted as belonging to the prehistory of the form (see my “The Limerick”, originally publishedin three parts in The Pentatette, November 1996- January 1997, for examples). Thackeray’s “nursery rhymes” should in my opinion be considered idiosyncratic variants based on the limerick books which had been published in the first half of the previous decade.

The Pentatette of September 1995, p. 4, reports that Thackeray did write limericks:

According to The Compleat Flea by Brendan Lehane (Viking Press, 1969), W.M. Thackeray’s “Wealthy Old Man of Tabreez” was one of several drawings-with-limericks sketched by Thackeray and friends of his, perhaps to amuse themselves one evening,

Did you know that here at nonsenselit.org you can read all the known 1820s limerick books?