After the success of his two Topsy-Turvys, Peter Newell published A Shadow Book (New York: The Century Co., 1896) in which after looking at a picture, e.g. of an Arab leading a camel,

you turn the page and place it in front of a light source, so that the image you now see represents something else, this case “A Rag Picker:”

Unfortunately, the images above were taken with a camera and do no justice to the real book: in many cases the different densities of the tints in the “front” picture produce nuances in the shadow one which enhance the effect. If I ever manage to find a way to get good images without ruining my copy, I’ll post the whole series.

It is likely that the book sold as well as the earlier ones, though it is harder to find as in many cases it was probably burnt by inattentive children who followed Newell’s back-cover suggestion of using a candle: 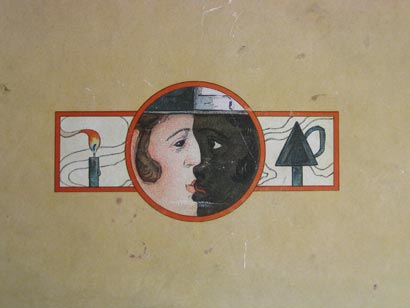 Better luck probably had those who preferred, or could afford, to use a light bulb, as recommended in the title page:

Shadow pictures, Kage-e, seem to have been common in woodblock prints of the Edo period in Japan, according to the pinktentacle blog. Here is one of the several instances posted:

In this case, first you looked at the shadow image cast on a door (in the example a hawk), and then discovered the real subject, a man in a very peculiar attitude.

1896 must have been the annus mirabilis of shadow books for the Century Co.: they also published Gobolinks, or Shadow-Pictures for Young and Old by Ruth McEnery Stuart and Albert Bigelow Paine. These were not real shadow pictures, but rather images obtained with a process involving, at least in part, chance:

Drop a little ink on a sheet of white paper. Fold the sheet in the center and press the ink-spots together with the fingers. All of the pictures in this book were made in this manner — none of them having been touched with a pen or brush.

To each of the images thus generated a short poem is added, in some cases a limerick: 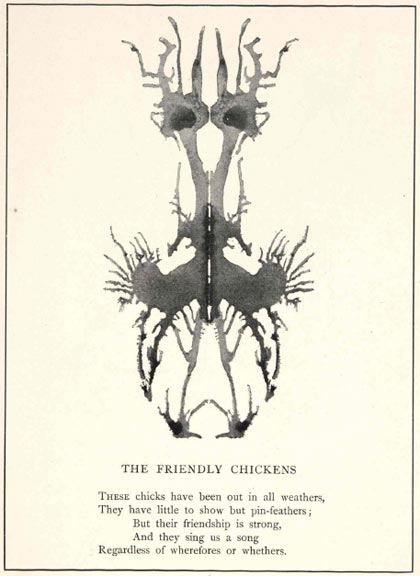 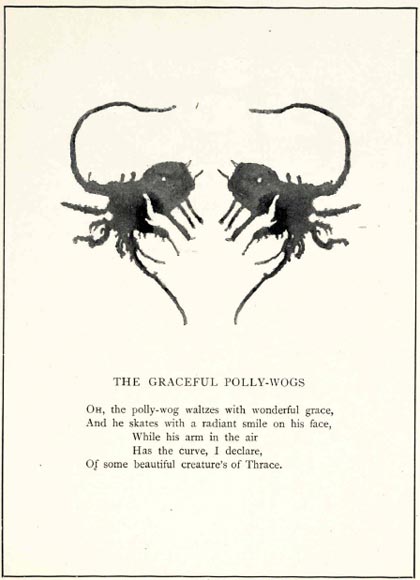 This entry was posted in Comics, Limerick, Peter Newell. Bookmark the permalink.