W.S. Gilbert never really wrote Nonsense; his Bab Ballads and other collections, while obviously influenced by Edward Lear ― especially in the strongly caricatural style of the pictures accompanying his poems in the early editions – are rather in the humorous narrative tradition of William Cowper’s “Diverting History of John Gilpin” and Thomas Hood’s “Miss Kilmansegg and Her Precious Leg.”

Early in his career, however, he produced imitations of Nonsense, the most famous ― owing to its publication history ― being perhaps “The Advent of Spring.” It first appeared anonymously in Fun in 1862:

THE ADVENT OF SPRING.

Under the beechful eye,
When causeless brandlings bring,
Let the froddering crooner cry,
And the braddled sapster sing.
For never and never again
Will the tottering bauble bray,
For bratticed wrackers are singing aloud,
And the throngers croon in May!

The wracking globe unstrung,
Unstrung in the frittering light
Of a moon that knows no day!
Of a day that knows no night!
Diving away in the crowd
Of sparkling frets of spray,
The bratticed wrackers are singing aloud,
And the throngers croon in May!

Hasten, O hapful blue,
Blue of the thimmering brow,
Hasten to meet your crew,
They’ll clamour to pelt thee now!
For never again shall a cloud
Out-thribble the babbling day,
When bratticed wrackers are singing aloud,
And the throngers croon in May!

The poem was then reprinted, apparently by mistake and with some variants, in Punch on 23 April 1873: 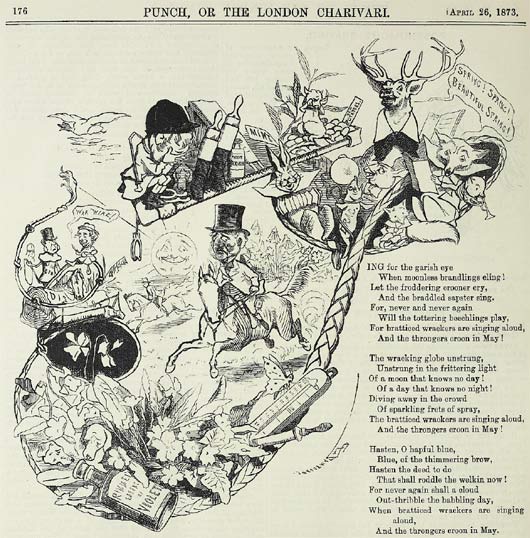 Shirley Brooks, editor of Punch at the time, wrote in his diary:

Miss Emily Leith has helped me into a mull. She sent me some things of her own some time back, and with them some very good nonsense verses in MS., which I also took to be hers, but which she says she told me were copied. If she did, I overlooked the statement, and having touched them up, used them this week, as they fitted a cut of Sambourne’s. Such things will happen, but I don’t do them often, usually eschewing outsiders.

And a few days later:

I inserted some verse sent me by Emily Leith, overlooking her distinct statement that she had copied them. So down come letters from Gilbert, who wrote them in Fun 10 years ago, Tom Hood and Burnand. Made the amende and wrote Gilbert. Mea culoa, and nobody else’s. (George Somes Layard, A Great Punch Editor. London: Sir Isaac Pitman & Sons, 1907. 542.)

“The Advent of Spring” is a parody of Tennyson’s notorious haziness of meaning, with particular reference perhaps to the poet laureate’s “The Progress of Spring” or “Early Spring.” The poem, with its profusion of invented words, sounds a lot like Lewis Carroll’s “Jabberwocky,” which would only appear ten years after the first Fun publication.

Tennyson is also mentioned in a second experiment with nonsense, which was published in Fun in two installments in 1865:

I saw a red-haired Jew from Aberdeen,
In a gabardine,
At the Tabard Inn,
He wore a sword which was its scabbard in,
On a Wednesday!

The model for these short monorhyme five liners seems might have been Edward Lear’s A Book of Nonsense, whose third edition, the first one to be widely distributed, had been published to great acclaim in 1861.