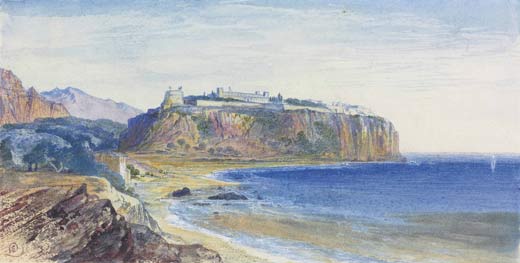 The present work is drawn from Cap D’Ail, in 1865 and looks towards the Prince’s palace on the left of the peninsular with the cathedral, since rebuilt, a little to the right. Lear wrote to his friend Chichester Fortescue (1823-1898) on 13 November 1864 when he was in the south of France; ‘had no idea the Cornice was so magnificent in scenery; Eza [sic Eze] and Monaco are wondrously picturesque, and Mentone very pretty’ (Lady Strachey, ed., Later Letters of Edward Lear, London, 1911, p. 51).

This entry was posted in Edward Lear and tagged Edward Lear, travel, watercolours. Bookmark the permalink.