The Victorian age saw a remarkable increase in the cult of personality and a consequence of this was a growing interest in collecting famous people’s autographs. An insatiable demand for historical manuscripts and celebrities’ signatures led to the creation of a public market: starting in the early 1830s, auctioneers held special sales of books and autographs. Thomas Thorpe, one of the best-known booksellers in London, soon became the leading dealer and by 1841 he was able to offer his customers a catalogue of about 16,000 items.

Autograph albums focussing on the owner’s friends were also very common from the early years of the XIX century, and Edward Lear often contributed to those of people he met with drawings and/or short poems.

Occasionally he also sent other people’s autographs to friend-collectors, which is not surprising as he knew many of the important people of the period. On 16 October 1860, for example, he records sending a number of autographs to Gussie Bethell:

Breakfast. 2 nice letters ― from T.G. Baring, ― asking me there: ― & from Gussie Bethell ― asking for Autographs. ― So I sent her Hallam Tennyson’s ― Count de Paris’s, & Holman Hunts. ―

He did the same for Lady Glass in a letter of 1867 which, ironically, was auctioned on eBay some time ago as incomplete: the page containing Lear’s signature having been removed, probably in order to sell the autograph separately. Here is the text of the remaining two pages:

Dear Lady Glass,
Please to thank Sir Richard for the Cheque for 75£ which I received yesterday, & intended to have acknowledged last night but could not get up to the “East Hill” in time, as I was obliged to go in the opposite direction.  I am very glad you like the Drawings: the Framer has now sent me his account, & you will owe me 62 francs de plus ― for glasses & frames.
I remember hearing you say that you collected Autographs, if those I send are of any use please to keep them: ― if not to destroy them.  The envellope [sic] is Mrs. Tennyson’s writing, and she has written her name so [page(s) missing] 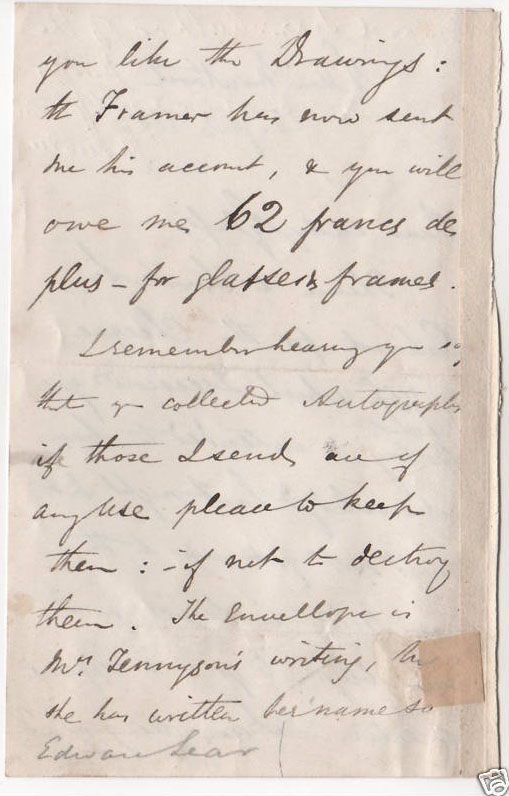 Autographs were still fashionable in the the late Victorian age, when the Picture Magazine, for the most part devoted to reprinting miscellaneous visual material, included a few pages of famous people’s autographs in each of its early numbers.

This entry was posted in Edward Lear, General. Bookmark the permalink.